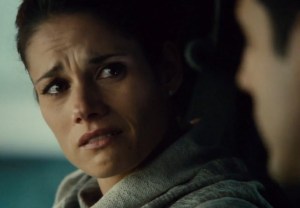 THE PERFORMANCE | This Thursday, officer Andy McNally faced a frightening future with her boyfriend Sam: he’s about to start a family, and it’s not with her. As the cop contemplated how to handle the fact that her beau’s ex, Marlo, is pregnant with his baby, Peregrym deftly and vividly brought alive the pathos and conflicting emotions within her character. How does she help raise a child that isn’t hers? Can she even do that? Should she leave Sam so he can be with Marlo? All those questions and more plagued a terrified Andy throughout the hour. You could practically see her mind racing with possibilities.

In the end, Andy decided she wasn’t going to give up on her relationship despite the challenges ahead. During a heartfelt and emotional declaration to Sam, Peregrym laid bare all of Andy’s feelings – and proved she will be one heck of a wonderful stepmother one day.

“Did I want to be the woman to make you a father? Yes,” she confessed to her boyfriend, voice cracking. “But just because this isn’t what I pictured, doesn’t mean I fold, OK? I have no idea how to do this. And I know it’s not going to be easy. But what I can say is that I love you. And I will show up, and we’re going to figure this out. I promise you, there’s not going to be a day where that child does not feel wanted or loved by me.”

Even though there were tears in her eyes and fear in her voice, Peregrym’s performance during the memorable speech also reminded us of the qualities that we so admire in the officer: her strength, conviction and commitment. You could say she was simply arresting.

Friday was Truth Day for Defiance‘s Irisa and Nolan, as the father/daughter figures took an arktech-fueled journey through shared memories. And as they laid eyes on these “lost” moments, Brit Stephanie Leonidas made evident her Irathient’s internal struggles. Revisiting the first anniversary of the Arkfall, Irisa — at the time but a tyke — was taken aback to truly process Nolan’s anti-Votan behavior. Next, we saw pre-teen Irisa being taught the “right” time to kill in cold blood. Then, after Nolan discovered that a teenage Irisa at one time nearly killed him in his sleep, Leonidas stepped to the fore as her character derided her maturation into a person now seen as only a killer. Painful was Irisa’s decision to leave town and start anew; more painful, her realization that she cannot.

All Tyrant‘s Leila Al-Fayeed wants is to be a good “mother” to the country of Abbudin. But the brutal gas attack on nearby Ma’an, designed to suppress the rebel faction, has left her the First Lady of a ruthless, besmirched player in the global community. For the brief time Leila believed Jamal’s spin on the situation, Moran Atias showed us a powerful woman at a loss, yet endeavoring, to aid her assaulted neighbors. But when the truth about Jamal’s complicity in the tragedy slapped her in the face, the Israeli actress made crystal clear how deeply Leila loves her country, almost a moot issue now that Jamal’s irreversible affront has betrayed Abbudin as well as his wife.