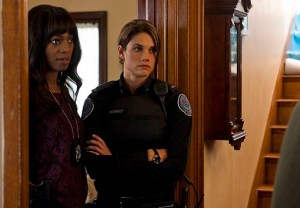 How horrible is he? “It’s not an appropriate shirt,” has never sounded so disturbing. And he makes his daughter sleep in a freezer in the garage when she’s “bad.” (Poor Gracie — from one crazy dad to another.)

His wife is completely subservient and afraid to challenge him, let alone leave him. But when she finally opens her eyes to the cruel example her husband has set for their kids — little bro poisons his sister for her rebellious behavior like dad did with their family dog — she vows to protect them no matter what.

But really, the storyline is a conduit to let Andy and Sam sort out their feelings about the big news that his ex Marlo is going to have his baby. Seeing how someone can do it completely wrong, Sam realizes he has a real shot at not screwing up his kid.

“For the first time in my life, I think I could be a good father,” he tells Oliver. “I know I’m not going to be like my dad. That’s because of McNally. I couldn’t wait to do this with her. How am I supposed to do this with Marlo?”

Oliver’s advice: “The best thing you can do for your kid is just to be happy yourself.”

Meanwhile, Andy is struggling to figure out where her place is in this new dynamic. She confesses to Traci that she’s terrified and has no idea how to do this or if she even can do it. Maybe it’s better for her to just step away and let Sam be with Marlo, so the child can have a real family, she thinks.

But after everything both she and Sam witness with their case, it’s obvious that there is no such thing as the perfect family, and it’s up to the parties involved to take control.

“Did I want to be the woman to make you a father? Yes,” an emotional Andy replies. “But just because this isn’t what I pictured, doesn’t mean I fold, OK? I have no idea how to do this. And I know it’s not going to be easy. But what I can say is that I love you. And I will show up, and we’re going to figure this out. I promise you, there’s not going to be a day where that child does not feel wanted or loved by me.”

Bravo! Although this storyline has all the makings of a soapy trope, the show has handled it very gracefully thus far, first with Sam being upfront with Andy about the news and now with Andy’s very mature and honest response. And Missy Peregrym nailed her character’s conflicting emotions in that final scene.

* The only guy Dov and Marlo can connect to the bomb from last season’s finale has not only disappeared, but he also supplies explosives to the police department. Uh-oh.

* Chris tries to break up with his married lover Jamie, but she distracts him – repeatedly. It makes for good times at home for someone else. “Happy wife, happy life,” her husband comments.

* Nick and Juliet continue to flirt with each other and be cute. Just get together already, you two!

Rookie Blue fans, what did you think of Andy’s speech?