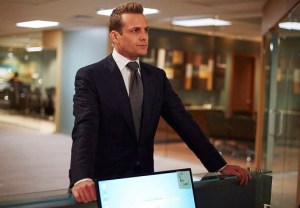 Harvey Specter & Co. are getting a very early vote of confidence.

USA Network has renewed Suits for a 16-episode Season 6, the network announced on Wednesday.

The news marks the show’s earliest renewal ever, just one episode into the fifth season. (The next closest was the legal drama’s Season 2 order, which came seven weeks into its freshman run.)

“Suits has set the bar high in every way and continues to be a strong performer and marquee property for USA,” USA Network president Chris McCumber said in a statement. “From the incredible on-screen performances and brilliant writing to the aspirational lifestyle portrayed, we look forward to continuing to bring viewers into the world of Suits every week.”

Added Jeff Wachtel, CCO of NBCUniversal Cable Entertainment: “[Executive producer] Aaron Korsh has some great surprises for the audience at the end of Season 5 that should really set future seasons on an exciting new course.”

Suits opened Season 5 last Wednesday with 2.1 million viewers, down 15 percent from its previous premiere, but an audience that grew to 3.44 mil with DVR playback factored in.