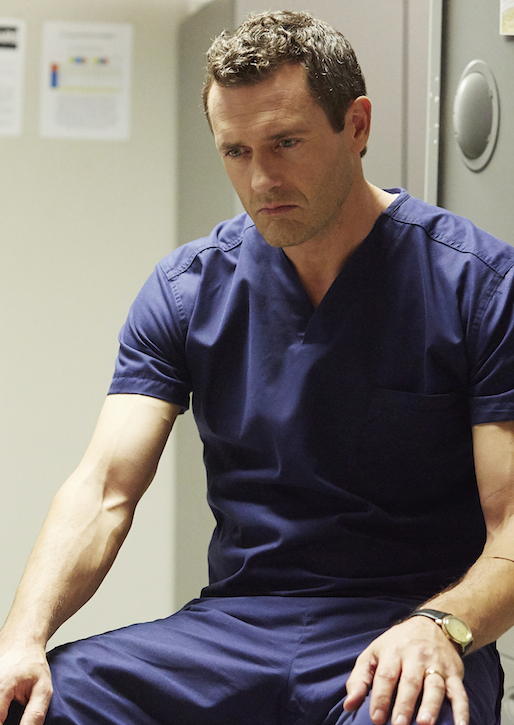 On USA Network’s new summer drama (airing Thursdays at 9/8c), Irish actor Jason O’Mara plays a surgeon who spends precious little time tending to actual patients, focused instead as he is on fending off a local gang that has charged him with keeping 11-year-old drive-by target Antoine safe and sound.

As if that weren’t enough for the good doc to barely handle, his cohort in this do-or-die agenda is a nurse, Gretchen (played by Jessica Szohr), who knows a thing or 12 about bending rules. All told, it’s a prescription for more and more… difficulties.

TVLine spoke with O’Mara about this edgy twist on the hospital drama, as well as sought a consultation on how his dinosaur series, Fox’s Terra Nova, might have been saved from extinction.

TVLINE | Three hours into the show, I’ve decided the title could just as easily be People Making Hasty, Ill-Advised Decisions — but I know that USA Network likes their short titles.
[Laughs] Obviously the pilot was called Complications and at that point I don’t think Matt [Nix] had fully decided which direction the show was going to take. We  talked briefly about possibly having an alternative title, but then when it became clear what the series was going to be, Complications became more and more apt.

TVLINE | It really does encapsulate the ongoing, spiraling mess.
I think it’s fair to say some characters make it complicated for themselves, while others have complications thrust upon them. But it’s certainly a heavy mix of kind of s–t going on!

TVLINE | I have to imagine what drew you in is that John’s intentions initially and forever are basically good.
John’s intentions are good, yeah, but he has this kind of…I don’t know what it is. It’s like a “sense of outrage,” and you don’t know when it’s going to come out. He’s on the edge, so he’s really capable of making any decision at any time and basically doing anything, whereas Gretchen is always like that. John is able to keep himself together most of the time, but then something will provoke him and he’ll go off, and in those moments he’s definitely capable of doing the wrong things.

TVLINE | I wonder if because his daughter died so young, something he had no control over, he now is poised to seek control of any situation when opportunity presents itself.
Absolutely. I think every human has moments in their lives where they feel out of control because they’ve either lost something they didn’t want to lose or didn’t get something they wanted. Even though that sounds kind of infantile, I think it’s what drives us as human beings for the most part, and it comes out of fear. It makes for a compelling character and something we haven’t really seen for a long time — the white man who’s spinning out of control, but ultimately has this moral compass, which separates John Ellison from, say, [Breaking Bad‘s] Walter White. 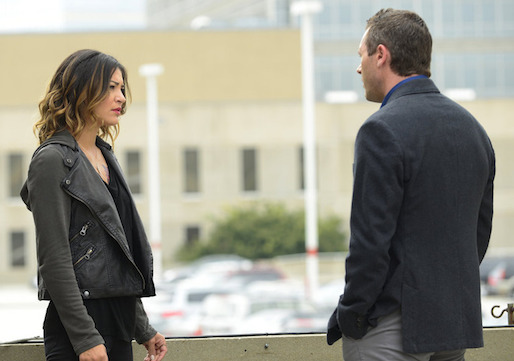 Gretchen. If anyone’s ever looking for an angel on their shoulder to steer them in the right direction, she’s not the person I would pick.
No. She’s like an angel, but she’s dressed in a leather jacket and biker boots. But at the same time, she’s got his back and he’s got hers. They’re both coming from a place of being damaged for whatever reason, and they’re trying to do the best they can in their small ways to fix the world around them. You might not be able to fix the state or the county or the city, but you might be able to, if you get your hands dirty, confront what’s going on in your immediate community and try to make some sort of change. The problem is that John and Gretchen have bitten off way more than they can chew.

TVLINE | And they keep biting off more!
I know. It’s partly because they’re pushed, and partly because they choose to take another step further. In the episodes coming up, the leader of the Gang Task Force is going to start sniffing around, and that’s not good for John and Gretchen — because they never chose to go to the police in the first place, because they felt it would ultimately be dangerous to the family, because the police are “just a security detail.” Now there’s a situation where they’re going to have to start lying to the police and everyone around them, so it’s literally John and Gretchen versus the world while trying to keep their loved ones safe. I must say, the intensity of the story really starts to pick up in this episode and the one after it — and it’s a breathless finish all the way to the end.

TVLINE | Let’s talk about the gang itself. You and I joked about this on Twitter, but have neither EZ (Anthony K. Hyatt) or Darius (Chris Chalk) said a simple “thank you” to John yet…?
No. They haven’t.

TVLINE | I keep waiting for one — even if it’s an obligatory gesture.
“By the way, thanks.” Maybe that would be the end of it, if he’d just say, “John, thanks” and John goes, “You’re welcome” and walks away and everybody’s fine. But no, I agree. There should be a “thank you,” but there certainly comes a moment where Darius and John begin to have this mutual respect for each other. Darius becomes a lot more humanized as the story goes on.

TVLINE | I think we saw a hint of that last week. If Darius wanted to be a total d—k, he could have said, “No, my boy is going to follow you on your little side mission,” but he pulled back.
Ultimately, Darius and John’s aims are the same. Neither one of them want more people to die, so that’s kind of where they start to meet eye-to-eye and even start to work together a bit. Also, we’ll learn a lot more about [Antoine’s father] EZ, and there’s a pretty major confrontation between John and EZ later on in the season. It doesn’t disappoint, because they’re both really staring each other down, but ultimately John has the upper hand, because EZ’s kid is still alive but John’s isn’t. 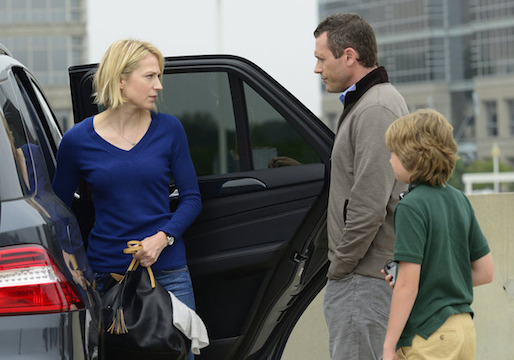 John’s daughter is never coming back, and that gives John this kind of sense of power. It’s really cool.

TVLINE | Turning to the home front: Does John know about this guy that’s been creeping on his wife Sam (Beth Riesgraf)?
It’s funny you should say that, because when I played the scene where she says, “Oh, my friend at the DA’s office helped with getting the cop car out front,” and John says, “Maybe you should get him a bottle of wine or something,” I played it more kind of knowing and the director thought, “That’s a little too much.” We have to play a little bit like he might suspect it, but we have to give her the benefit of the doubt. Ultimately, that will come to a head — and at the worst possible time.

TVLINE | Before we wrap up here, I had to note: You know what’s big right now? Dinosaurs!
My son has always liked dinosaurs but his interest recently has been piqued, to say the least. He’s seen Jurassic World twice now — I took him the second time — and wants to go again. To his generation, it’s every bit as good as Jurassic Park, despite the snobbiness of those of us old enough to have seen the original on 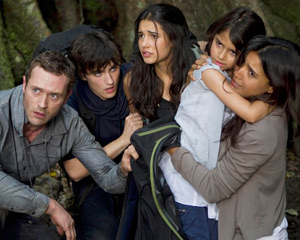 the big screen back in ’93. I mean, he hasn’t been this into dinos since Terra Nova was on!

TVLINE | It does make you wonder if Terra Nova was perhaps released not adjacent enough to any Jurassic sequel, to capitalize on such buzz.
Certainly, there wasn’t much in the way of dino-shaped zeitgeist when Terra Nova was on [in fall 2011]. It would have been cool to have been part of a pop cultural wave that might even have yielded more episodes. They say that hindsight is 20/20, so I don’t spend much time thinking about “what ifs.” Although, my wife [Paige Turco]’s series The 100 has achieved spectacular things visually, without leaving the mountains of Vancouver. Perhaps if we had shot Terra Nova for less [money] there instead of Australia, it could’ve made the difference? Who knows.

I do get a kick out of people on Twitter asking me if there will ever be a second season; I wish I could say yes. Some people even ask me why I cancelled it! As if I had that kind of power! I guess some people have found the show on Netflix and don’t understand why it abruptly stops. I’m like, “I wish you watched it on TV when the ratings counted!” They could have even sent plastic dinos to Fox along with the other fans. But these days, nobody wants to part with their plastic dino toys. The kids are too busy playing with them!