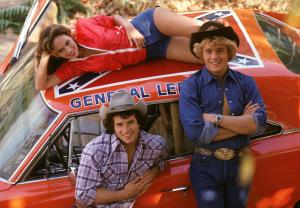 How much to get the The General Lee a new paint job?

That question might be on the mind of Dukes of Hazzard fans after TV Land yanked twice-daily reruns of the show earlier this week due to controversy over the Confederate flag emblazoned on the roof of the 1969 Dodge Charger driven by its central characters, Bo and Luke Duke.

“Warner Bros. Consumer Products has one licensee producing die-cast replicas and vehicle model kits featuring the General Lee with the Confederate flag on its roof,” the company noted in a release. “We have elected to cease the licensing of these product categories.”

Dukes alum Ben Jones, who played Cooter on the early ’80s series, spoke out on Facebook against the controversy surrounding the vehicle, noting “that flag on top of the General Lee made a statement that the values of the rural south were the values of courage and family and good times… Activists and politicians are vilifying Southern culture and heritage as being bigoted and racist. We know that is not the case. And we know that in Hazzard County there was never any racism.”

CMT also airs Dukes of Hazzard reruns, but a quick scan of Xfinity cable listings shows no upcoming episodes in the next two weeks.

Did TV Land make the right move in yanking the campy series from its airwaves? Take our poll below, then sound off in the comments!