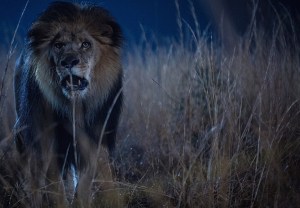 In the rundown of “Wait! What?!” questions raised by the premiere episode of CBS’ new summer thriller, Zoo, “Why are lions waging an organized war against humans?” barely cracks the Top 5.

For starters, after seeing his best friend seemingly mauled to death by a lion in the back of a van, how come handsome safari guide Jackson Oz (The Crazy Ones‘ James Wolk) isn’t a blubbering, wild-eyed mess, but instead apologizing for the quality of the coffee he’s serving to a pretty/traumatized Frenchwoman?

Also, is there any number of fuzzy house cats congregating in a single tree that would cause you to panic (rather than whip out your iPhone and create a viral video)? And would said tree’s proximity to a day camp for children affect your reaction?

What is the definition of pettifoggery? (Don’t feel bad: I had to use a combination of Google and phonetics to come up with the spelling.) 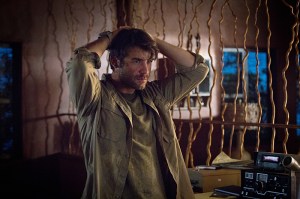 And finally, if the lions have (as that final scene led us to believe) mastered the art of pulley technology, is there a chance that next week’s episode will find them cutting letters out of magazines and demanding a ransom for Abraham’s safe return? (sENd fANcY fEAst or AbE bEcomEs TARtarE!)

That’s a show that’d have me setting a Series Recording on my DVR. Zoo in its current state? Well, anything with Wolk, Veep‘s Reid Scott (barely utilized) and Law & Order: SVU‘s Tamara Tunie (reduced to a handful of lines) warrants a second chance, but I’m cautiously pessimistic.

With my two cents cast into the duck pond — fret not, they’re probably saving felonious fowl for Season 2 — let’s do a quick recap of the action from the episode titled “First Blood.”

BOTSWANA | Our opening scene introduces us to hard-drinking Jackson, who fled Boston and his mad-genius dad (Ken Olin) some 12 years ago — and is clearly haunted by the old man’s outlandish theories about when/how animals might band together to say “No more!” and “bite back” against humans who are ruining their planet. He and his best friend Abe head to an outpost of their resort — leaving behind Abe’s teenage son, who spends most of his free time watching… videos of Jackson’s dad?! — and find it deserted. Their only clue is a dropped videocam suggesting some sort of animal attack. “What if it was multiple lions in walking in single file?” asks Jackson, out of nowhere, after finding only one set of paw prints.

Out in the bush, Abe and Jackson inexplicably step out of their jeep — a fool move that ends with Abe getting trapped with a lion in a vehicle and Jackson abandoning (!) him with a comely blonde who staggers out of the tall grass with tales of her entire sightseeing group being reduced to ground chuck. “How does one get eaten to death?” she asks, and I assume it’s some sort of shock/ESL combo that’s causing such a ludicrous query. 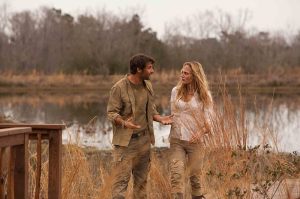 Soon after, their vehicle breaks down — the lions “got to the radiator,” Jackson suggests — and they’re forced to finish the journey back to camp on foot. Frenchie* (Chloe Tousignant) sees her worst nightmare come to fruition when a pack of male lions close in on them, knocking them over an embankment — but not before Jackson can spot a “defiant pupil” in the ringleader cat, a trait that dear old dad used to rant about. “Maybe my father wasn’t entirely crazy!” he exclaims, but before he has a chance to investigate further, he’s arrested by the local cops for interfering with lawful hunting. (There’s a whole backstory to that, but I just cahhhn’t right now.) Meanwhile, the lions hoist Abraham up into a tree, and we see his eyes flutter as he’s flung over a limb. (*Not her actual name)

CALIFORNIA | Two drinking buddies peeing in a downtown Los Angeles alleyway get attacked by… lions?! (Side note: Where are the lady lions? Anyone who’s ever watched Wild Kingdom knows the females are the true hunters, even though their lack of dramatic mane may not be as appealing to cinematographers.) 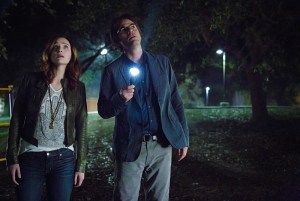 Turns out the beasts were escapees from City of Angels Zoo — and dogged reporter Jamie (House of Cards‘ Kristen Connolly) is convinced that the dangerous behavior leads back to the zoo switching feeds to a subsidiary of Graydon Global, a megacorp that owns pretty much everything, including her newspaper. Jamie gets fired (then kinda sorta un-fired) because she’s running a ridiculously titled side blog called “Girl With the Genie Tattoo” — Tunie’s boss editor says the blog’s use of “pettifoggery” is a giveaway that it’s Jamie’s — but the drama also causes her to put the kibosh on a sexual relationship with her section editor (Scott). Somehow, their conversation includes multiple variations on this never-going-to-happen catchphrase: “Stop chasing the unicorn that killed Kennedy.”

During her investigation, Jamie learns that dozens of cats have gone missing in Brentwood — #SaveCupcake — and when she interviews a flirty animal pathologist (Billy Burke) at the zoo, that side note about the tabbies sticks in his craw. Later that night, he calls her out to a darkened field — gurrrrl, you’re sure he’s not the villain from Season 1 of True Detective? — and tells her he’s cracked the case. ALL OF THE KITTIES ARE IN A TREE RIGHT NEXT TO AN ELEMENTARY SCHOOL THAT’S ABOUT TO HOST A SUMMER CAMP. Surely, there’s a “hang in there” inspirational poster to be referenced, but both Jamie and pathologist dude look srsly freaked out.

THE PHILIPPINES | We learn via background news report that people in the Philippines are bracing for largest volcanic eruption ever — and clearly that’s not a simple coincidence, right? More on that in the coming weeks, I presume?

What did you think of Zoo? Will you be paying a return visit? Grade it in our poll below, then sound off in the comments!