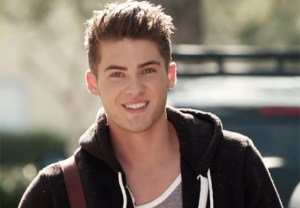 Scott might not have much faith in Stiles’ detective skills, but after Tuesday’s Teen Wolf, I’ve never been more certain about his instincts: There’s something about Theo.

The Rosewood transplant sat Scott and Stiles down this week for a debriefing on his initial transformation — he claims he was attacked by an Alpha while skateboarding in an empty swimming pool — and everything appeared in order. Stiles even followed Theo into the woods, with Liam in tow, only to catch him in the act… of laying a flower at his sister’s watery grave. (What a rebel!)

If that’s where the episode ended, I’d be willing to file Theo under “totally innocent” and call it a day. But that’s not where it ended. The final scene found Theo chastising his father — or, at least, the guy who’s supposed to be his father — for botching the signature on his transfer papers. The punishment? No big deal… just a freaking hammer to the hand.

Elsewhere in Beacon Hills this week…

FOR THE BIRDS | Speaking of questionable family situations, this week’s episode introduced us to Tracy, an apparent friend of Lydia’s with serious supernatural drama going on. After telling Mrs. Martin about her “night terrors,” which included haunting visions of a raven, she straight-up puked out a bunch of black feathers. Mama Martin assumed Tracy had just eaten her pillow — is that a thing?! — but Lydia knew better, enlisting Parrish’s help to keep an eye on Tracy in case of any future shenanigans. And unless being kidnapped by the Doctors and turning into a werewolf is a common occurrence for Tracy, I’d say that qualifies as a shenanigan. Unfortunately, Parrish and Lydia were too busy flirting — he told her their night of surveillance was “not a total waste” — to keep a proper eye on their wolfed-out charge. Yikes. 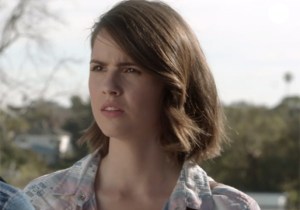 DRIVE ME CRAZY | Forget onis and nogitsunes; Kira’s dad learned this week that there’s no more dangerous creature than Malia Tate behind the wheel of an automobile. While going for a test drive in the school parking lot, Malia was suddenly stricken by a traumatic flashback of a time she drove — or was driven — through the woods at night. It’s anyone’s guess as to the specifics of Malia’s flashback, but with the Desert Wolf’s arrival now just a few episodes away, I’m willing to bet there’s a connection.

* When Stiles noticed that his dad wasn’t wearing his wedding ring any more, is it bad that my first thought was, “Good, now he can date Scott’s mom”?

* Am I the only one who thought Mason already knew Liam was a werewolf?

*  Just forget I asked this question.

OK, Teen Wolf fans, it’s your turn to make sense of this week’s episode: What’s up with Theo? Do you support the ongoing Parrish-Lydia flirtation? Drop a comment with your thoughts and theories below.