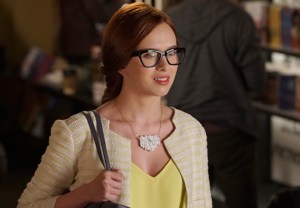 As all Pretty Little Liars fans can attest, it’s not uncommon to shout think “WTF?” during any given episode of the ABC Family drama — and Tuesday’s hour presented what might have been the WTF-iest moment in the series’ history.

I’m talking, of course, about Spencer’s opening nightmare, in which a creepy young dancer lead her through the catacombs of Radley in an attempt to deliver some sort of message. Spencer claimed the girl reminded her of a young Alison, but I know I’m not the only person who got major flashbacks to The Ring during that freaky little ballet. (Note to Spencer: If you see a well, run!)

A follow-up trip to Radley with Hanna confirmed Papa DiLaurentis’ assertion that Charles is dead, giving birth to a new theory: Someone Charles was close with is now pretending to be him — and it turns out that “someone” might just be Lesli. That’s right, Mona’s “pal” Lesli was also a patient at Radley, long enough to know Charles and Bethany Young, and Lesli was none too pleased when Mona told her what the girls discovered.

Fortunately, the hour wasn’t a total nightmare for Spencer. She bumped into her old sponsor Dean — who, unfortunately, wasn’t wearing his Significant Mother costume — and was able to get out of her head for a little bit. He also gave her his number, though I don’t think Spoby fans should start freaking out just yet. (Or do. Since when does anyone listen to me?)

PICTURE IMPERFECT | I love Aria, but there’s got to be something loose in that girl’s head. She’s been out of captivity for like five minutes (maybe 10) and she’s already taking field trips to creepy junkyards with Clark, a guy she barely knows. I’m just thankful she politely turned down his offer for a date; the last thing she needs is to jump into a relationship with yet another guy who’s probably stalking her. Of course, it was the discovery that Clark might have accidentally photographed “A” that really got Aria’s attention. (Side note: Did anyone else’s ears perk up when Clark mentioned the photography contest? I’m thinking Aria will be an L.A. lady after this season’s five-year time jump.) 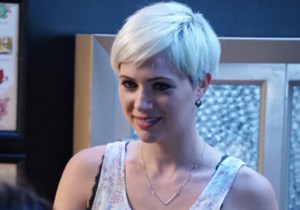 THE EMANCIPATION OF SARA | Despite the focus on Lesli, this week’s episode did nothing to squash my suspicions about Sara. Per Emily’s suggestion, and with a little extra help from Caleb, the pixie-haired enigma took the first steps in getting herself legally emancipated from her mother. (You know, the mother we still haven’t seen and probably doesn’t even exist.)

* Is there even a remote possibility that Alison’s trip to church camp won’t be a complete disaster? Or that Papa D. isn’t already planning on burying Lorenzo next to Charles?

* I love that we now know Spencer’s mom works out at Curves. (And don’t you forget it! It could be a clue!)

* Am I the only person who didn’t know Caleb owned his own web design company?

PLL fans, what are your thoughts on Lesli now that we know she might be connected to Charles? Drop a comment with your latest theories below.