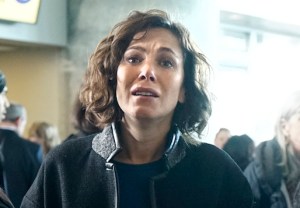 Sgt. Odelle “Call Me Isabel Rainey” Ballard’s American Odyssey has in fact come to an end.

#AmericanOdyssey Heartbreaking. But you all have been the best. xo

In American Odyssey‘s final hour — SPOILER ALERT! — Odelle (played by Anna Friel) made the difficult decision to go ahead and share her story, including everything that she had learned about Societel funding terrorists and Osela slaughtering her unit on Army orders, even if it mean cutting short her family reunion to go on the run, using a blonde wig and “borrowed” identity. So, ostensibly, her odyssey could have continued.

American Odyssey premiered on Easter Sunday to 5.4 million viewers and a 1.2 demo rating, retaining about half of its A.D. lead-in. It soon enough plunged to a 0.5 in the demo, and for six out of its last eight airings mustered just a 0.4.