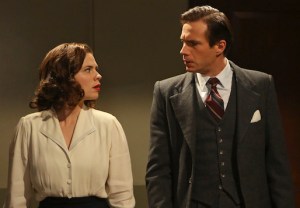 In Season 2 of Marvel’s Agent Carter, Peggy will “journey from New York City to Los Angeles for her most dangerous assignment yet,” where she “discovers new friends, a new home… and perhaps even a new love.”

But she’ll have at least a few familiar faces around, as well.

Lyndsy Fonseca (as Angie), Bridget Regan (Dottie) and Chad Michael Murray (Agent Jack Thompson), meanwhile, are said to be in talks to return.

The Marvel movies off-shoot was picked up for Season 2 in May, when ABC revealed its schedule for the 2015-16 TV season, where it will again serve as a hiatus gap-filler for sister series Agents of S.H.I.E.L.D.

In a TVLine finale poll, 96 percent of respondents desired to see Peggy return for a second mission, with half of that group just dandy with the short-season format.