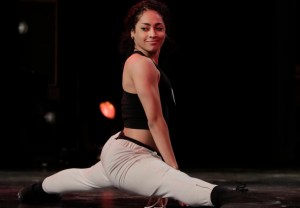 I would never call So You Think You Can Dance executive producer/head judge Nigel Lythgoe an old dog, but I nevertheless applaud him for cooking up some new and totally unexpected tricks during Night 1 of the Season 12 callbacks.

A perky pair of hoofers take a detour to a chapel (complete with Elvis impersonator officiate) and tie the knot before hitting the stage. A handsome ballroom hopeful injures his foot, then enters commercial break weeping in a wheelchair on an abandoned loading dock. A geeky kid whose family has never attended one of his performances is asked to dance for his life following an iffy choreography round. And each and every one of ’em… gets dropped like a flimsy t-shirt in Magic Mike XXL!?!? (Fret not: We’ll discuss Twitch’s PG-in-reality/NC-17-in-facial-expression striptease momentarily.)

Yes indeed, let us mark this as the very moment that SYTYCD‘s threadbare feel-good tropes turned into brutal liabilities. 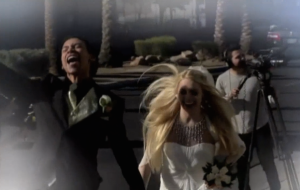 Sure, new judge Jason Derulo continues to exhibit the charisma of a boiled rutabaga, but he, Nigel and Paula Abdul aren’t letting a good backstory cloud their view of what’s happening on the stage in front of ’em. Kill it on the dance floor or be killed in the competition, seems to be their mantra. And I’m not mad at ’em for that.

With that said, let’s review the four most memorable moments from the two-hour telecast:

4. Blink and You Missed a Great Solo | The show didn’t spend much time on ballet dancer Dorian Flores’ solo, but his feathery leaps juxtaposed with his muscular power have me hoping for a Chehon-esque trajectory.

3. “I Married a Fellow Contestant and All I Got Was Six Minutes of Screen Time?!” | I expected Nigel & Co. to reward overrated contemporary chick Kelly MacCoy and wildly outclassed Tyrell Noll — who met on line for Season 11 auditions — for getting hitched on camera. But the latter’s initial solo was so logey, they didn’t even send him to choreo, while the former’s Broadway routine was so out-of-sync with her fellow competitors that her dream went the way of the Hot Tamale Train, too.

2. Now With 75 Percent More Twitch! | Oh how I wish Nigel had replaced himself with Travis Wall and given Jason Derulo’s seat to Twitch. I mean, I’m sure Travis and Twitch will be great mentors to Teams Stage and Street respectively, but the latter alumni’s extended screentime this week was a true joy. Watch his animated facial expressions during particularly ferocious hip-hop routines! Turn to mush as he comforts/encourages a rightfully spiraling chick with not enough training to survive ’til the Green Mile! Hold your breath as he unbuttons his shirt during a countdown of the Top 5 reasons to see his new male-stripper movie (opening July 1)! 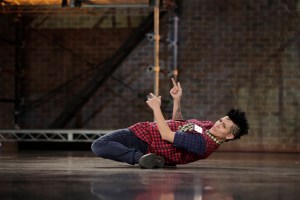 1. Girl Power! | Standing Ovarion, Megz, Jessica Rabone, Jaja Vankova and especially Urellis — to name a few — proved so ferocious, so funky, and so completely mesmerizing, I didn’t take it as kidding at all when Twitch wondered if his team would be made up entirely of women.

What did you think of Night 1 of SYTYCD callbacks? Who were your faves? Were there any miscarriages of justice? Sound off below!