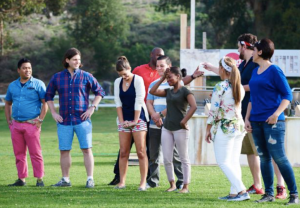 Last summer’s edition of Food Network Star was something of a collapsed soufflé — after a lot of time and effort, the end result (a win by the relentlessly inauthentic “Cowboy Lenny” in an otherwise dubious field of cooks) had me wondering if it was time to retire the recipe altogether.

Season 11, however, has felt like a trip to a Michelin-rated restaurant following a month locked inside a White Castle.

After last night’s July 4th cookout challenge, we’re left with eight finalists who’ve all mastered some degree of food authority, on-camera appeal and an interesting point of view. When your menu options include a sometimes drag queen making party food, a former NFL star with a flair for Caribbean flavors and a painfully shy/adorable food-truck operator from Staten Island, it’s hard to imagine any Season 11 outcome that would be wholly unappetizing.

Best of all, though, with Bobby Flay and Giada De Laurentiis as the sole permanent judges — true confession: I don’t miss the condescension of Alton Brown — weekly eliminations have been so consistently logical that we’ve been freed of the typical outrage/irritation that’s a hallmark of reality-competition genre. Hashtag-spouting creep Matthew starts giggling over a fellow competitor’s downfall? Giada changes her vote and sends him packing. Charming Italian-food lover Rosa fails to master a simple portobello sandwich? Away she goes! Bobby and Giada are demanding good food — but also remembering that likability/charisma are essential ingredients, too.

With that said, here’s my current ranking of the eight remaining contenders — along with a pithy assessment of their pros and cons:

6. Rue Rusike – Her bubbly persona and focus on Southern African fare make her unique — but failure to heed judges’ advice to personalize her stories is a huge problem.

5. Jay Ducote – Last year’s champ was a burly BBQ expert, too, but Jay’s homespun Louisiana style is actually charming. That said, I’m still having nightmares about his watery, olive-green gumbo.

4. Emilia Cirker – “Spice Class” sounds like a dang good idea for a show — and the judges have generally liked her food. Her occasionally icy demeanor, however, could use about 20 minutes in a 300-degree oven.

2. Dom Tesoriero – Judges keep noting Dom’s tendency to flee the scene of his presentations — so maybe TV isn’t his calling? That said, he has yet to make a less-than-delicious meal — and his flashes of charm and humor make me think he’s the Season 11 dark horse.

1. Eddie Jackson – Early favorite stumbled with a one-note pork loin this week, but the former football pro’s natural charisma and kitchen skills — as well as his decision to abandon his confusing “Cheat Day” concept — keep him at the top of the pecking order… for now, anyway.

What do you think of Food Network Star‘s eleventh season? Is it possibly the show’s best season ever? And who are your current faves? Take our poll, then sound off in the comments!