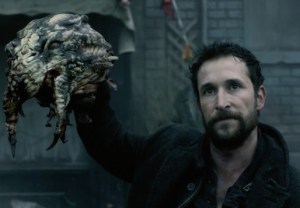 The playing field — and Tom Mason — were quite different as TNT’s Falling Skies unleashed its fifth and final season on Sunday night.

Picking up right where Season 4 left off, Tom has a conversation with the ET (Espheni queen?) that he had woken up to after the moon mission — though he sees her as his wife Rebecca. Fashioned as a “memory” of a convo the marrieds once had about her breast cancer, Rebecca speaks in words that apply just as well to the war on Earth, saying how she wants to “hit it with both barrels, and maybe this monster goes into remission… I want to eradicate this.” 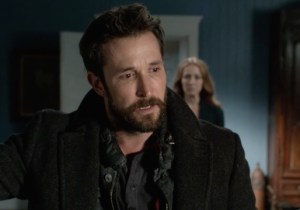 Continuing with the double meanings, she warns Tom, “You never know where a rogue cell might be hiding,” and then counsels him, “You have to get more than mad…. You must tap into your primal rage… even if it costs you.

“Find your warrior,” she sums it up thusly, before volumes of water come splashing through the Boston bedroom’s windows, submerging Tom… who later, mysteriously, resurfaces in the water on Earth, and then makes tracks for the 2nd Mass, which conveniently turns out to be a two-day walk.

Back at camp, Weaver nudges a mournful Anne to speak to the troops — “Own the pain, and the sooner you get through it” — so she tells everyone that while Tom and Lexi may be gone, the good news is that the Espheni power core is down. After that setback, their foe bugged out in a mass exodus. As she speaks, we see Tom making his way back, fending off a winged ET along the way — but he’s not satisfied with leaving it wounded, but seeing to it that it’s dead. “Find your warrior” and all.

Once reunited with the 2nd Mass, Tom shares some of his “memory” with Anne and the boys. Anne posits that he was hallucinating aboard the cold beamer, while Ben suggests the ship used autopilot to get him back to Earth safely. Whatever the case, Tom gets a clean bill of health before addressing the 2nd Mass. There, he asserts that for the many sacrifices they each have made to mean anything, they need to get mad — with rage, not anger. “It’s time for overkill,” he trumpets. Whipping out the head of the ET he had met up with, he challenges them all to “Find your warrior!”

To track down and neutralize some nearby tech, three groups are formed. Alpha, led by Hal, has an easy time dispatching with some wild skitters and a beamer that crashed into a barn. Bravo company runs into some mechs that have no fight left in them. The Charlie group, led by Tom, is lured into a trap, though, and surrounded by skitters. When one of the bugs kills Scotty, Tom uses the fallen comrade’s corpse to bait the skitters in the direction of a bomb — 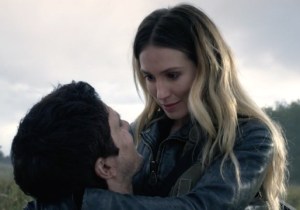 but the remote doesn’t work. Luckily, Bravo team rides to the rescue, and Sara (of all people) shoots the bomb, exploding the trees and the alien ship they were holding.

On the walk back from the mission, Maggie asks Hal about how he made sure Ben was assigned to a different group; Hal romantically declares, “I’m not letting you go,” as he swoops her up in his arms. After some more flowery words, he makes clear: “I’m asking you to hurt Ben… to break his heart to be with me.” But as much as Maggie loves Hal in return, she reiterates, “These feelings for Ben, I can’t control them — and neither can you.” Meaning: the triangle continues.

After Matt, whom Tom had encouraged to be a part of Charlie group, reveals that he was unnerved by his father’s tactics involving Scotty’s dead body, Tom and Anne touch on his new “warrior” mentality. With a nod to how Tom made her take off the pendant that reminded her of lost Lexi, lest she get lost in depression, Anne says, “I don’t want to get lost in rage either.” 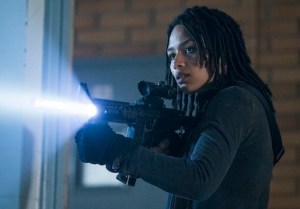 Having determines that an Overlord must be situated nearby, Tom insists that the nearby Woodrow Wilson High School must be the hiding spot, seeing as he saw a conspicuous bust of Wilson during his “memory” with Rebecca. At the school, they take out a gymnasium full of skitters, but when Anthony and Denny split off to scope out the pool, some skitters grab Denny and rip her in half, right in front of a distraught Anthony.

Tom finds the Overlord in a storage room, and talks to him via Ben. The Overload says he is “not afraid,” contending that he has leverage in his connection to Ben, but Tom argues that he could shoot the big guy right there and all his son will get is “a headache.” And Tom does just that, popping the ET leader in the noggin, and then a few times more for good measure: “I am not afraid either.”

But is there yet another, final threat

to deal with before humankind can march to victory…? Because as the season opener comes to a close, at a funeral pyre for Denny, Tom gets stung on the back of his neck. And when he looks at the swatted bug, he sees that it’s unusual and secreting some sort of metallic goo…