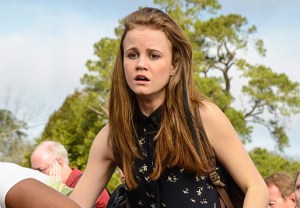 CBS’ Under the Dome opened Season 3 on Thursday night with 6.3 million total viewers and a 1.3 demo rating (per finals), down 34 and 38 percent from its previous premiere (which led out of a Big Bang rerun on a Monday), as well as down from its sophomore finale (7.5 mil/1.8, airing after a fresh Scorpion).

TVLine readers gave the two-hour opener an average grade of “B-.”

Opening the Eye’s night, Big Brother (6.4 mil/2.1) matched Wednesday’s opener and dominated the night in the demo. Year-over-year, it was down just 3 and 7 percent.