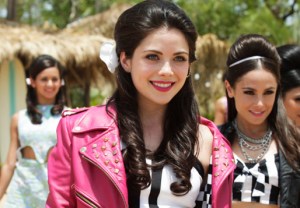 You don’t dive into Disney Channel’s Teen Beach 2 expecting to have your mind blown, so by the time the final twist is introduced, it’s too late to prepare yourself.

The sequel to Teen Beach Movie, which premiered Friday, begins simply enough: The first film’s “it” couple — Mack (The Fosters‘ Maia Mitchell) and Brady (Austin & Ally‘s Ross Lynch) — are adjusting to life back in the real world after a summer of singing and surfing with the characters of Wet Side Story, but they don’t remain separated from their silver-screen pals for very long.

After experiencing a taste of what life could be like as a fully-evolved, self-actualized young woman, Wet Side Story‘s Lela (The Vampire Diaries‘ Grace Phipps) decides to flee her limiting movie world for a new life with Mack and Brady. Naturally, Tanner (The Fosters‘ Garrett Clayton) tags along for the ride, one in which the musical twosome discovers the joys of our modern world, from selfies to segways.

Now, here’s where things get crazy: After a bit of back-and-forth about which characters belong where, Lela and Tanner eventually return to the world of Wet Side Story — but they’re not the same people they were when they first left home. In addition to Tanner now being a low-voiced Danny Zuko type, Lela has become so empowered that the entire movie-within-a-movie morphs from Wet Side Story to Lela, Queen of the Beach.

Naturally, this has serious repercussions for Brady and Mack, whose entire romantic backstory hinges on the existence of Wet Side Story. In the final scene of Teen Beach 2, the memory-challenged couple meets and falls in love all over again, this time at a sing-along of Lela, Queen of the Beach, which Mack — who’s now a surfer — helps organize as a fundraiser. (So for those of you keeping score at home, yes, it is like the first movie never happened.) 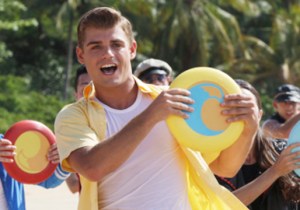 TVLine discussed the surprise ending with stars Clayton and Chrissie Fit, both of whom are in full support of the film’s total 180.

“We didn’t wrap it up in a nice little bow,” Clayton admitted. “We’re not a normal movie franchise, and I don’t think we ever have been. … I like the message it sends: You make your own choices in life. A lot of people struggle with that, and I love that Grace’s character represents choosing your own path. You might not know where you’re going, but you know you’ll be happy in the end because it’s your decision.”

Added Fit, “The girl-power in this movie is insane. It’s so cool to see healthy female friendships where the girls aren’t competing and bullying each other. So the fact that [Wet Side Story] changed to Lela, Queen of the Beach is really cool. And I’d love to see that movie! They could be totally different characters; maybe CheeChee wouldn’t have a beehive all of the time.”

Clayton believes that Tanner is more of an “action hero” in Lela, Queen of the Beach, and it certainly doesn’t hurt that he gets to wear one of the last three remaining James Dean jackets from Rebel Without a Cause. “It wasn’t the jacket [Dean] wore,” Clayton clarified. “But it’s the company who made it, and there are only three left in the world.”

Speaking of things that come in threes, am I the only person already thinking of storylines for the next (inevitable) Teen Beach movie? Drop a comment below with your thoughts on the franchise’s future, as well as this movie’s big twist.