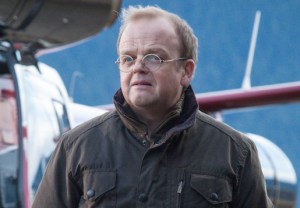 On Fox’s Wayward Pines this Thursday we got a look “behind the curtain,” seeing how Dr. David Pilcher fka Jenkins keeps the town humming along and safe from our “distant cousins,” as well as gained insight into how he first hatched this (really, really) forward-thinking plan to preserve a doomed humankind.

Here are the 10 biggest bits of intel gleaned from Ethan’s tour, punctuated by Pilcher’s flashbacks.

♦ During Ethan’s tour of the hollowed-out mountain that houses the almost self-sustaining Wayward Pines’ inner workings (including the volunteers who fake the outbound phone calls), he discovers they have at least one captive “abbie.”

♦ Back during our time, Dr. David Pilcher was dismissed by the global community as a crackpot as he authored books and led lectures about humanity’s doomed fate and next stage of (d)evolution. With nudging from his sister, he siphoned profits from his tech company and other sources to fund his cryo-preservation plan, calculating that 2,000 years would be enough time for the planet to “reset.”

♦ Rather than wait for his predicted vision of end times to actually near, Pilcher acted proactively — beginning with recruitment.

♦ Arnold Pope had been just a mild-mannered security guard at Pilcher Technologies, until one day Pilcher approached the onetime druggie/wannabe cop with the offer of a “second chance,” by helping him “recruit” others who got a “bum deal” in life for the experiment — starting with a doctor, Charles Keen. Other eventual residents, like hypnotherapist Megan, joined on as like-thinking volunteers.

♦ It took two years to build — or at least pull up 2,000 years’ worth of weeds from! — Wayward Pines, once Pilcher and others emerged from their cryo state.

♦ When Ethan raises the question many of us had – Why not just tell the adults the truth? – Pilcher reveals that he in fact tried that, with the original batch of thawed-out citizens. But the reality proved too jarring and the people either ran away (into the abbies’ waiting, savage arms), caved to despair and killed themselves, or unleashed anarchy, as seen in a flashback to a decrepit, burning Wayward Pines. Ethan, Kate, Pope at al were thus “Group B”!

♦ Pilcher specifically woke Ethan from his cryo-slumber because the town was again becoming “unstable” under Pope’s ruthless rule, and he needed someone to “make things better.”

♦ Pilcher’s rallying cry for Group B is to protect the First Generation, the youth who are educated on and more open to the town’s twisted truths. But there is a “new threat” out there, Pilcher warns – led by, we discover, Kate and husband Harold, who have covertly assembled a bomb to take down the fence. “After what happened to Peter [McCall], I’ve had enough,” Kate tells Harold, who apparently has a fiancée “out there.” (Note to Harold: You don’t.)

♦ Elsewhere during the hour, Theresa struggles to evade her nosy boss and investigate the mysterious Plot 33, which is undeveloped and overgrown amidst other, fine properties.