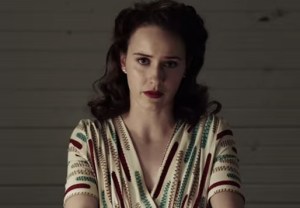 Pop quiz: How much evil does it take to do good?

That’s the very question that WGN America’s Manhattan is hoping to solve in its upcoming second season, for which a trailer was released Thursday.

In the video below, Frank and Liza Winter, Abby Isaacs, Fritz Fedowitz and more Los Alamos residents crack under the pressure of a polygraph test — until one of them decides to hint at the unsettling truth of his work on The Hill.

Scroll down to watch the new teaser for Manhattan, which returns this October.

* HBO’s comedy special Ferrell Takes the Field — in which comedian Will Ferrell travels to spring training ballparks and plays every position on 10 different teams — will debut Saturday, Sept. 12, at 10/9c. New seasons of Project Greenlight and Doll & Em will premiere back-to-back on Sunday, Sept. 13, beginning at 10 pm.

* ABC Family has greenlit the one-hour drama pilot Guilt, the cabler announced Thursday. Described as an “edgy, soapy thriller,” the potential series revolves around an American in London who becomes the prime suspect in the savage murder of her roommate.

* All 10 episodes of the Netflix drama Narcos — which stars Pedro Pascal (Game of Thrones) and chronicles the real-life stories of 1980s drug kingpins — will be available on Friday, Aug. 28, at 12:01am PT.

* TLC’s Who Do You Think You Are? will return for a summer season on Sunday, July 26, at 9/8c. The new episodes will feature Tom Bergeron (Dancing With the Stars), Bryan Cranston (Breaking Bad), Ginnifer Goodwin (Once Upon a Time) and Alfre Woodard (State of Affairs).