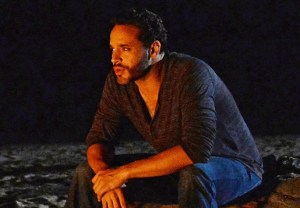 The following contains spoilers from the Season 3 premiere of USA Network’s Graceland.

It took a couple of commercial breaks, but the Graceland Season 3 premiere eventually answered the question viewers had been left grappling with for months: Had FBI Agent Mike Warren in fact died?

As it turns out, yes, Mike did die.

Meaning, for some six minutes after Sid Markham fatally closed off hospitalized Mike’s oxygen supply, Mike had crossed over, only to be resuscitated by some doctors with defibrillators, after Briggs found his bud flatlining.

Everyone at Graceland knew that Mike had cheated the Reaper, but Sid was duped into thinking he had felled his foe — until toward episode’s end, when Mike raced out of his hospital bed to interrupt Paige’s meet-up with the crooked LAPD gang task force leader, suspecting as he did that it was a trap.

Paige meanwhile spent part of the hour dealing with her pangs of guilt, knowing that it was she who put Mike in harm’s way in the first place, by pointing Sid to the hospital where he’d been hidden away. But now Paige herself had a target on her back, one she hoped to erase by getting Sid on tape ‘fessing to murder and what not. When Mike eventually intervened, she at first lashed out — “Stop trying to save me!” — and then announced to the house she had put in for a transfer, and thus would be moving out.

MIA for the big Paige/Sid/Mike three-way was Briggs, who spent his day riding shotgun with Ari, a member of a top-shelf arms-dealing Armenian crime family. Briggs was strong-armed into the unsavory gig by Special Agent in Charge Logan, who had come into possession of the compromising Juan Badillo cassette tape (found among Mike’s effects). Logan’s idea of a “wash” is for Briggs to help do what no one has come close to accomplishing before, bringing down the Sarkissians — even if it means Briggs witnessing and being party to illegal, sometimes murderous acts, transgressions that likely will take him down along with any of his marks.

So… Mike’s alive, Briggs is in deep, Paige has Mike’s forgiveness but not her own, Charlie has a bead on money launderer Germaine, Johnny is still doing Carlozzzzz Solano’zzzzz bidding, and Jakes is fed up with people shirking the chore wheel.

What did you think of Graceland‘s return? And do I already see a line forming to help Paige pack her bags?