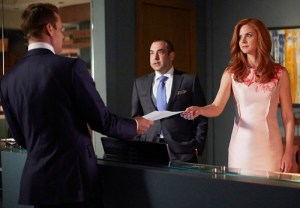 Has the unflappable Harvey Specter finally lost his cool?

On Wednesday’s Season 5 premiere of Suits, the lawyer practically falls apart as Donna goes to work for Louis as his secretary.

Even when things haven’t gone his way before, Harvey has managed to, if not hold it together, then at least be confidently distressed and angry until everything eventually worked out in his favor. But Donna’s absence throws him so much, he has to seek out a psychiatrist! (These two might not be in love with each — riiight — but that says a lot about their relationship, doesn’t it?)

Initially, Harvey is convinced that Donna will return to his desk at any moment. “There’s nothing to talk about, because it isn’t going to last,” he tells Mike.

But when Donna doesn’t come running back to him, Harvey starts to disintegrate. He has a panic attack— like full-on, hard to breathe, sweaty, puking episodes right in the firm’s bathroom. He visits a psychiatrist under the guise of needing pills to help him sleep, but the doc is wise to his game. She knows he’s really coming to her because he’s scared he’s going to have another attack. Still, she’s not about to prescribe him anti-anxiety drugs and instead pushes him to confront his feelings head-on.

Meanwhile, Louis — being Louis — thinks his perfect new professional arrangement with Donna is too good to be true and almost ruins it before it even starts. He finds a list of possible secretaries that Donna is saving for Harvey and assumes it means she’s already planning her exit. The fact that he discovers it after Harvey gives him the can opener to pass on to Donna doesn’t help. Louis gives her an impossible workload and a mouthful of orders so angry, she feels uncomfortable. 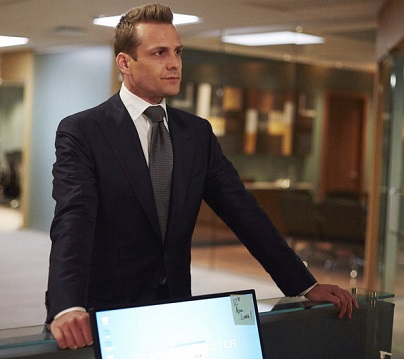 As for Harvey, he swallows his pride and comes to Donna for help with an overwhelming case, but she rejects him, leading to another panic attack.

Even Jessica senses the weight of what’s going on.  After all, “the woman you wouldn’t come work here without is now working for someone else,” she notes. “Scottie leaving didn’t throw you off your game this much.”

The psychiatrist warns Harvey that the episodes will continue until he accepts the fact that Donna may never come back. So he finally asks for that list of secretaries just as Donna and Louis partake in a Welcome to Team Litt cake. Then he proudly tosses the sample pills. (But hopefully not the trips to the doc, because Harvey looking inward is interesting and different.)

Elsewhere, newly engaged Rachel and Mike are in a blissful bubble and decide not to let anyone else inside it except for her family. That doesn’t last long, though, because Donna is Donna and knows everything. Also, Mike accidentally spills the news to Harvey, which is a much nicer moment than when the younger, now swagger-filled lawyer confronts Harvey about taking advantage of Rachel’s willingness to help during Donna’s absence. In the end, Harvey makes good and takes Mike to a Mets game to celebrate the engagement.

Suits fans, what did you think of Harvey’s emotional journey? Are you looking forward to Donna and Louis working together? Grade the season opener via the poll below, then hit the comments to back up your pick.