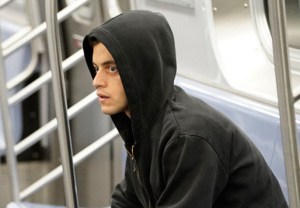 “I know what it’s like to be different. I’m very different, too.”

That confession, uttered by protagonist Elliot on Mr. Robot‘s series premiere, might just be the understatement of the year.

As we quickly learn in the USA Network hacker drama, which premiered Wednesday, Elliot (Rami Malek, The War at Home) is exceedingly unique. A cybersecurity engineer by day, Elliot spends his nights as a vigilante hacker, prying into the computer files of pedophiles and cheaters who don’t want anyone to know they’re pedophiles and cheaters. (Case in point: Elliot kicks off the pilot episode by exposing a mild-mannered coffeehouse owner who has a side business distributing child pornography.)

But the hacker lifestyle isn’t all it’s cracked up to be — that is, if you thought the hacker lifestyle was anything more than doing morphine in an empty apartment and crying oneself to sleep. (It isn’t!) To combat his overwhelming loneliness, Elliot even hacks into the computers of his friends (such as scatterbrained co-worker/I-assume-eventual-love-interest Angela, played by Mr. Sunshine‘s Portia Doubleday) and his recently divorced therapist, Krista (Gloria Reuben, ER).

And, to make matters even more gloomy for the socially anxious computer whiz, Elliot spends most of the premiere hour believing he’s being followed by a series of imposing-looking men in dark suits. But more on that in a minute.

Perhaps the most defining characteristic of Elliot’s is his deep-seated hatred for corporate conglomerates. The problem is, at the cybersecurity firm where Elliot works, their biggest client — E Corp, nicknamed “Evil Corp” —  is one such group, and it’s Elliot’s job to protect the corporation when their servers are masterfully hacked by an anonymous source.

After he successfully stops the hack on Evil Corp — but chooses not to wipe out all evidence of the person who did the hacking — Elliot is approached by Mr. Robot (Christian Slater, Mind Games), a representative for an underground team of hackers that wants to take down Evil Corp and cause the biggest incident of wealth distribution the world has ever seen. Elliot is, understandably, fascinated by Mr. Robot, his team of hackers and the old arcade in which they do their work — but he wants to expose the rebel group to the cops almost as soon as he learns the work they do.

In fact, Elliot remains dead-set on exposing Mr. Robot’s team to the authorities… until his cybersecurity firm takes a meeting with Evil Corp to assess the damage of the server hack, and CTO Terry Colby (Bruce Altman, Blue Bloods) proves himself to be nothing more than a wealthy, arrogant jerk. (The exact kind of person that Elliot likes to ruin, as we learned earlier.) In that moment, Elliot decides he’s going to side with Mr. Robot, after all, and provides Evil Corp with a modified computer file that ultimately frames Colby for the hack on his own company.

But even after Colby is taken away in handcuffs, the surprises keep on coming for Elliot: In the middle of Times Square, where he’s celebrating Colby’s arrest, Elliot is approached by a number of men who look like they belong in the Secret Service and chauffeured to a mysterious office building. There, he is greeted by the same men-in-suits that he believed had been following him all week — and one of them is an Evil Corp employee whose creepy salutation (“Bonsoir, Elliot.”) can only be a sign of bad things to come.

OK, your turn. What did you think of Mr. Robot‘s debut episode? Grade the episode via our poll below, then hit the comments to back up your choice!