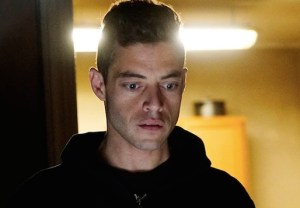 Mr. Robot 2.0 is already on the development queue, just hours before the USA Network drama even premieres.

The network has renewed the drama for Season 2, consisting of at least 10 episodes, to debut in 2016.

“We knew from the moment we read Sam Esmail’s provocative script, and witnessed the brilliant performances of Rami Malek and Christian Slater, that Mr. Robot is a stand-out series that is unlike anything currently on television,” USA Network president Chris McCumber said in a statement. “The overwhelmingly positive fan reactions to the pilot and the broad sampling of it, reaffirms our confidence in the series, and we’re excited to see where this timely drama will take us for Season 2.”

Bowing tonight at 10/9c, Mr. Robot follows a young programmer (played by Malek) who works as a cyber-security engineer by day and as a vigilante hacker by night.

The network notes that the pilot, which was released early online and On Demand, has been sampled by 2.6 million viewers to date.