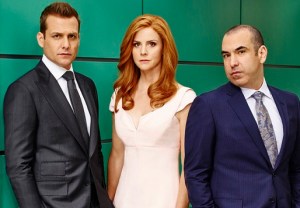 For a non-couple, Suits power duo Harvey and Donna sure are going through one heck of a couple-y rough patch in Wednesday’s Season 5 premiere (USA Network, 9/8c).

With Donna having quit to go work as Louis’ secretary, her interaction with her former boss is “strained” at best now, star Sarah Rafferty previews.

“They’re both disappointed in each other in different ways,” she adds, “and it doesn’t make for a copacetic relationship.”

Below, the actress spills about the fallout from the pair’s “I love you” confessions, as well as her alter ego’s profesional and personal future with Louis. Plus: Will Donna take charge of pal Rachel’s big day?

TVLINE | There was a lot of back and forth last season about Donna and Harvey’s feelings for each other. What’s your take on them? Is she in love with him?
I think there’s a major difference between what Donna’s conscious feelings are and what her unconscious feelings are. Stuff got confusing at the end of the last season for her. She thought she was going to go to jail, and she basically needed Harvey to save her. It made her more confused about how she felt about [him]. I think she always felt that she was not in love with Harvey and that they were not a match. But something shifted.

TVLINE | When I talked to [executive producer] Aaron [Korsh] at the end of last season, he said something similar about Harvey. He loves Donna, but he don’t necessarily think she’s The One for him. But maybe that’s just because he’s in denial. Or maybe he has issues, emotionally.
Donna has always told herself that she and Harvey aren’t right for each other because Harvey is in no way ready to have the kind of emotional relationship that she wants to have. She doesn’t think he’s emotionally intelligent. I think that’s why she thinks they shouldn’t be together, and [why] she tells herself that she doesn’t love him. But people’s conscious thoughts and subconscious thoughts can be very different.

TVLINE | Given all that’s happened between them and the changes going forward with Donna working for Louis instead of Harvey, does this push them to bring what’s subconscious to the surface?
Individually, it may do that. Harvey can’t deny that he has to deal with his emotional life head-on going into Season 5. He’s reeling from Donna leaving him. He finds himself needing to go to a psychiatrist.

TVLINE | For Harvey, it says a lot that he feels he needs professional help.
His symptoms make it sort of undeniable for him. He has no choice. 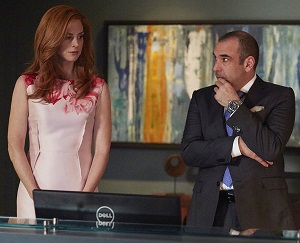 TVLINE | How is Donna dealing? Is this a good change for her, switching over to Louis’ desk?
She thinks so. She’s a hundred percent committed to moving over to Louis’ desk and having a really clear boundary in that way. That being said, it’s not an easy situation. It’s more complicated than she may have anticipated it to be because it puts her in a hard spot a number of times.

TVLINE | Also, Louis has a tendency to be his own worst enemy, and I feel like he’s going to alienate her in some way.
I know! Wouldn’t that be so tragic? I don’t know what’s going to happen. [Laughs] As a viewer, I fear those things, too.

TVLINE | Donna is awesome, so I don’t expect her to wait around for Harvey – if he does have feelings for her. Will we see some romance for her with somebody else?
I don’t know yet. I certainly would be open to it. I imagine that she’s not sitting at home pining and eating Ben & Jerry’s by herself and watching TV. She’s probably having a full, rich good time. [Laughs]

TVLINE | Rachel and Mike are engaged now. Can we expect Donna to be the Maid of Honor?
I hope so! I think she would be offended if she wasn’t. Whatever they decide to do — if they’re going to have a traditional or non-traditional wedding — she’s going to be involved in some way.