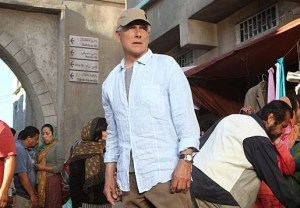 Rule No. 45 tells us, “Clean up the mess that you make” — and CBS’ NCIS will have to do just that when Season 13 arrives, seeing as Gibbs (played by Mark Harmon) was last seen getting shot, twice, by young Luke Harris.

Gibbs, DiNozzo and CIA Officer Joanna “Dorneget’s Mom” Teague had tracked Luke to Zakho, Iraq, where he was spirited away by the kid-targeting terrorist group known as The Calling. There, Gibbs split off from the others to track a suspicious girl through a marketplace. She ultimately gave Boss the slip, leaving Gibbs out in the open, where Luke coldly popped the NCIS leader, first in the leg and then in the chest.

TVLine readers gave the cliffhanger finale an average grade of “B.”

Two things to keep in mind as you weigh in on “What Happens Next”:
* Mark Harmon is signed on for Season 13 (premiering Sept. 22)
* Show boss Gary Glasberg has said that the premiere will pick up right where the finale left off

Rewatch Season 12’s final minutes below, then review our poll options and share your prediction for how the cliffhanger will shake out.
https://youtu.be/Gfra9D1D3uA?t=2m29s