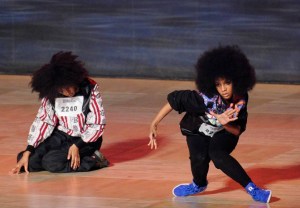 We’re pretty early into So You Think You Can Dance‘s 12th season, and yet I’m thinking we’re already overdue for a Change.org petition banning neophyte judge Jason Derulo from uttering any variation of his utterly meaningless go-to critique: “I was there for it.” “I was in there with you.” “I was in.” “I was all there for it.”

I was… about to press my index fingers so deeply into my eardrums that I’d never endure the “Talk Dirty” singer’s limited vocabulary again?

On second thought, no, I won’t inflict such an arbitrary punishment on myself — especially after a New York City audition episode that featured one too many head-scratching judgment calls from Derulo, De-giddy* and De-pervy**. I mean, how come only one of the fierce battling female street dancers got a callback? How did that unsteady Vegas-based chica score three “yeses”? And why did our panel express such surprise that the super-strong contemporary kid was as talented as his female partner? (*Paula Abdul, obvs) (**Nigel Lythgoe, who shouldn’t act as if taking a job on the Vegas strip means a woman must suffer through his leering commentary)

Not to say that SYTYCD‘s trip to the Big Apple was full of worms (sorry — that one made me groan, too). We had a tribute to Paula’s “Cold Hearted” video (which really doesn’t get the respect to which it’s entitled, does it?). We had a heartbreaking backstory from a Bronx b-boy that ended in a joyously tearful collapse. And we were treated to a returnee from Season 8 who quickly became a contender for Ricky Ubeda’s crown.

So with that said, let’s count down the five best auditions from the New York auditions:

5. (tie) Eliazez Chapman | Aforementioned b-baller’s verrry slow rotation while balancing on one hand was a jaw-dropper, but his zippy, “backwards crustacean” crawl was equally impressive. The kid’s got versatility!

4. Connor Bermingham and Kenya Welch | Their “Say Something” choreography was a wee bit obvious, but his tremendous physical strength and her exceptional elegance kept me very engaged.

3. Ryan Raffloer | Blonde ballroom fella who pulled a Billy Idol and went dancin’ with himself got slapped with the cheesy label from Jason and Nigel — but if the good folks at Dancing With the Stars were watching, methinks they’ve found a sure-fire new pro for their fall 2015 edition. Ryan’s footwork was faster than Kim Kardashian sprinting toward her next opportunity for self-promotion.

2. Angely “Cookie” Deaza and Angela “Angyil” McNeil | I loved Cookie’s wicked flexibility and the way she brought a regal bearing to this street battle, while Angyil matched her with freaky facial expressions and stuttery animation. The duo’s face-to-face floor-slide was as intriguing as any single move I’ve seen on the show all season — and yet only one of ’em advanced to Vegas? I cannot for the life of me figure out why.

1. Virgil Gadson | Broadway vet and Season 8 Top 30 contender threw in a killer side leap and some Broadway bounce to his hip-hop routine — which benefitted greatly from the 27-year-old’s undeniable charisma and his ability to cut through with occasional bursts of humor.

OK, your turn. Who were your favorite hopefuls from the NYC auditions? Sound off in the comments with your thoughts!