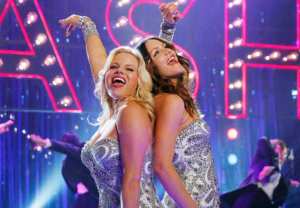 Let’s not turn this into a referendum on whether Megan Hilty or Katharine McPhee makes the better Marilyn Monroe, OK?

Oh, who are we kidding? That’s half the fun of the news that Universal Stage Productions has begun development on a stage musical version of Bombshell — the fictional Broadway show at the center of NBC’s two-season musical-within-a-musical drama Smash.

“There is a still a lot of love for Smash and a rabid fan base out there, and we’re thrilled to be able to keep the dream alive as we work towards bringing Bombshell to theatre audiences,” said Robert Greenblatt, chairman of NBC Entertainment, in a press release announcing the production. “Over the course of two seasons, an entire Bombshell score was written to service Smash storylines, and now that show will have a chance to stand on its own.”

Greenblatt did not specify whether Bombshell is being eyed for a Broadway run or some other platform such as off-Broadway or a touring-company version. None of the original Smash stars are currently attached to the project.

Many of Smash‘s behind-the-scenes players are attached to the Bombshell revival, including executive producers Craig Zadan and Neil Meron, choreographer Joshua Bergasse, songwriters Marc Shaiman and Scott Wittman, and even Steven Spielberg, who was also an EP on Smash.

Excited about a real-life Bombshell? Would you buy tickets to see it in person? And who would you cast as Marilyn? Take our poll below, then sound off in the comments!