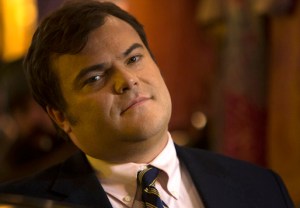 In HBO’s The Brink, which premiered Sunday, a low-level bureaucrat, a drug-dealing navy commander and the U.S. Secretary of State were faced with the rise of a schizophrenic dictator and the dawn of World War III.

The dark comedy, starring Jack Black (School of Rock), Tim Robbins (Mystic River) and a pornstache-less Pablo Schreiber (Orange Is the New Black), is meant to serve as an over-the-top satire on present-day geopolitical affairs. Unfortunately, its heightened reality and trio of drugged-up caricatures make it hard to see how the overall product will play out as anything more than some warped fantasy.

Let’s introduce the aforementioned clan and the role they play in The Brink‘s international kerfuffle:

Alex Talbot (Black) is a middling State Department employee working at the United States embassy in Islamabad. Though he uses his international gig as a chance to score weed and party with local women, he once dreamed of working for the C.I.A. When he and driver Rafiq (The Daily Show‘s Aasif Mandvi) get caught in the midst of a military coup d’etat, they flee to the home Rafiq shares with his parents, his sister and renowned psychologist uncle Hasan to keep from harm’s way. It’s there they learn that the riot was championed by former Pakistani general Umair Zaman (Iqbal Theba, Community), a egomaniacal lunatic once treated by Rafiq’s uncle. Despite losing in his nation’s general election, Zaman has seized control and intends on using nuclear warheads to annihilate Israel in wake of recent drone strikes.

Walter Larson (Robbins) is the Secretary of State under President Navarro (Esai Morales, NYPD Blue). When he isn’t butting heads with Secretary of Defense Grey, he’s cheating on his wife with Asian call girls. He’s called upon by the president when the CIA gets word of the nuclear arsenal’s vulnerability, but his desire to forgo military action is overruled by Israel’s own intentions of launching a preemptive strike should the U.S. refrain from getting involved. Grey’s motion to bomb Pakistan as a preventive measure is ultimately favored by Navarro once Alex faxes over Hasan’s confidential medical records that reveal Zaman himself is a truly loose cannon. Once Walter’s advice is disregarded by POTUS, he alerts assistant Kendra of his intention to go rogue to prevent a mass war from breaking out.

Zeke “Z-Pak” Tilson (Schreiber) is a well-respected lieutenant commander for the United States navy. When he isn’t busy protecting our nation or impregnating the navy’s public affairs officer, he’s dealing pills to fellow servicemen as part of a “covert” operation with ex-wife/supplier Ashley. En route to Islamabad, it becomes clear the pills he and his co-pilot popped prior to takeoff were not Xanax, and their high-as-a-kite, “hell of a ride” to Pakistan continues on with the loopy duo authorized to bomb the residential Pakistani area.

As the episode fades to black on Zeke’s trippy excursion, it immediately becomes clear that The Brink‘s misadventures have only just gotten started. And though the cabler will rollout the 10-episode comedy weekly, it might ultimately be better served as one five-hour binge. We haven’t ruled the war comedy out quite yet, but it’s going to have to be, well, funnier, in subsequent half-hours.

But enough about what we think. What did you make of The Brink? Grade the premiere in our poll and sound off in the comments below.