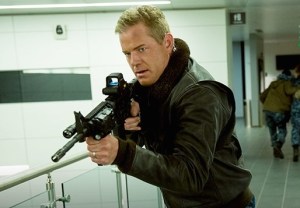 I was rather hesitant to cue up my screener for The Last Ship‘s two-hour Season 2 premiere (and to do so, I even scrapped plans to run down the street to catch Inside Out, grrr), given how the TNT drama’s freshman run ended.

As Season 1 closed, I was surprised to see the Nathan James get safely to port so soon into the series, and I frankly dreaded the idea of the show becoming land-locked as our Navy heroes butt heads with some misguided, headstrong, armed-to-the-teeth ersatz government based out of Baltimore. I’ve “seen that movie before” on Revolution, Falling Skies…

As such, you can imagine that I came away from the Season 2 premiere quite pleasantly surprised, as well as quite entertained.

Picking up where things left off: Aboard the Nathan James, Slattery, Doc Rios & Co. tended to wounded Quincy while keeping the primordial hidden from Avocet boss lady Amy Granderson’s goons. The rest of the crew was corralled, but not before O’Connor made a run for it and jumped overboard. He’d ultimately shimmy up the anchor chain and signal to his comrades that he was back on board. Quincy meanwhile barely hung on by a thread; when his captors then threatened wife Kelly, he claimed he hid the primordial, before ripping open his wound to bleed out.

On shore, Chandler and Green infiltrated the Olympia complex (where the dead were being burned for power/electricity), while CMC Jeter kept watch over Chandler’s dad and kids as they holed up in an abandoned apartment. The only “drama” on that front: The son upchucked a bit and developed a fever, forcing Jeter to make a pharmacy run and in turn get spotted by a street rat who ratted him out to some Avocet goons. But Jeter and Papa Chandler fended them off.

Inside Avocet, Rachel made a “deal” with Granderson, that if she were allowed to disseminate the few doses of the cure she had handy, to “undesirables” on the street, she’d help Avocet manufacture more — as long as it’s dispensed more broadly.

During the attack on Olympia, Chandler made nice with an asset of the “warlord” Thorwald, then met with the rebellion leader himself. Operating off the “enemy of my enemy…” principle, the gents allied to infiltrate Avocet from underneath while Green powered off the lights — which happened just in time, since Granderson’s lead scientist was about to extract stem cell somethingoranother from Foster’s unborn baby, to act as a new primordial sample!

Back on the ship, Miller and Cruz sneaked off to meet up with O’Connor and they stormed the armory, while Slattery slipped away to monitor and assist in their takeover from a comm room. Since many Avocet troops had left to help deal with the Olympia attack, the Nathan James soon enough was reclaimed.

The seizing of Avocet 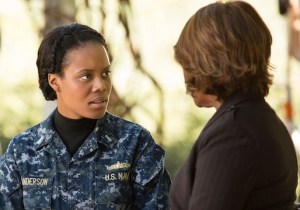 meanwhile was abetted by Tex, who had gotten wind of the “new world order” and infiltrated the complex as a security guard, where he promptly got a bead on and protected Rachel. During the takeover, Alisha got shot, while Thorwald was fatally felled as he broached Mama Granderson’s office. In the end, Chandler faced off on the roof with Granderson, whom he urged to surrender, seeing as her only choices were “trial or death.” She agreed to surrender… but then jabbed herself with the toxic cocktail her people had been handing out to the unworthy citizens.

(Note: If you read my Season 1 finale recap, you may recall me wondering, “How key of Season 2 players can Titus Welliver and Alfre Woodard be if they both are headlining new series, Amazon’s Bosch and NBC’s State of Affairs?” Though the latter series wound up being moot, that question was sure enough answered!)

With Amy Granderson dead, myriad minions gunned down and the people she was providing harbor to now wise to her insidious grand plan, the Avocet threat was neutralized, as the Nathan James crew gathered to bid farewell to those they lost, now wary of the dangers and surprises potentially lurking at “home,” on land.

Want scoop on The Last Ship, or for any other show? Email insideline@tvline.com and your question may be answered via Matt’s Inside Line.