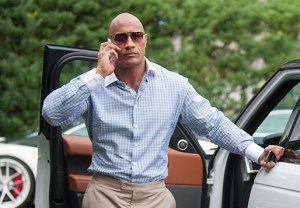 Don’t be fooled by the stereotypes you may have heard about retirement: For ex-NFL players, it isn’t all about golf courses, Bingo Nights and vacation homes in Miami.

But for retired Miami Dolphins linebacker Spencer Strasmore  — the protagonist of HBO’s sports comedy Ballers, played by San Andreas‘ Dwayne Johnson — his post-pro football life isn’t quite what he imagined. Despite living in a beautiful Florida home, with a gorgeous woman on his arm, Spencer’s new career as a financial consultant to the current NFL stars isn’t fulfilling him.

After the sudden death of his former teammate Rodney Slater, Spencer promises his boss (Rob Corddry, Childrens Hospital) that he will ramp up his efforts to bring in new clients and “monetize his friendships.” Easier said than done, considering one of his clients is Ricky Jerret (John David Washington, Malcolm X), a temperamental Green Bay Packer who gets cut from his team after getting freaky in a nightclub bathroom and punching a civilian (who sort of deserved it, but that’s neither here nor there).

Spencer spends most of the premiere episode trying to rehabilitate Ricky’s image, and ultimately lands the hot-headed player a meeting with the Miami Dolphins coach (Chicago Hope‘s Peter Berg, who also directed this episode). The coach initially dismisses Ricky when he is a minute late for their crucial meeting, but is later impressed by Ricky’s drive and offers him a spot on the team.

In the meantime, when he’s not working near-miracles for Ricky, Spencer is giving a $300,000 loan to one of his pals Vernon (newcomer Donovan Carter), who he then brings on as an official client so that Vernon won’t waste all that money on his freeloading family and friends. As happy as he is to help his friends in need, though, Spencer has to be careful how much money he gives away: By the end of the half-hour, the financial consultant doesn’t have enough cash in the bank to even make a $200 withdrawal.

Ballers‘ Sunday-night debut is abundant in a lot of things, namely football jargon, scantily clad women and strong-enough writing to warrant a few genuine belly laughs. What it lacks, though — much like Ricky Jerret himself — is a clear creative focus, and that could be reason enough for the HBO comedy to fumble.

What’s your take on Ballers‘ series premiere? Grade the episode via our poll below, then hit the comments to back up your choice!