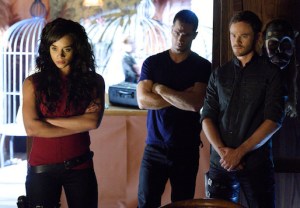 Syfy on Friday night allowed entry into a new universe — a world patrolled by Killjoys. Will you keep the new space saga in your crosshairs?

Killjoys stars Hannah John-Kamen (The Hour) and Aaron Ashmore (Warehouse 13, Smallville) as Dutch and John, interplanetary bounty hunters — or Killjoys — who as agents of the Reclamation Apprehension Coalition chase deadly Warrants (fugitives) throughout the Quad, a planetary system on the brink of a class war.

After a cold open that gives a taste for how crafty this tag team can be, John intercepts a Level 5 Kill Warrant for his estranged brother, D’Avin (Brothers & Sisters‘ Luke Macfarlane), who’s currently serving as an indentured fighter. John attempts to spring D’Avin and… well, he hadn’t quite figured out the rest of his plan. So as the siblings slug it out in an arena, Dutch catches wind of John’s deception and winds up helping her partner free his bro and spirit him away.

The thing is, Warrants — especially of the Kill level — tend to stick, so Dutch and John need to somehow make the one assigned to D’Avin go away. Dutch consults her colleague, Bellarus, who discovers that this particular kill Warrant was issued by The Company, an ominous entity that sometimes enlists the RAC to round up scalawags. Dutch learns that there’s only one fugitive The Company wants more than D’Avin, and that’s some guy named Rolly Desh.

Working as a team in staking out 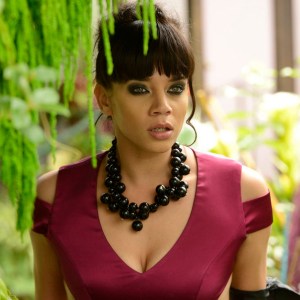 some (sadly mundane- and Earth-looking) soiree, D’Avin spies Rolly, but when Dutch goes to grab him she gets nicked by a poisoned dagger meant for her — thrown by a rival Killjoy, Fancy Lee. While D’Avin and John chase after Rolly, a mysterious older man, Khylen, finds woozy Dutch and helps her ward off the poison. As he does so, Dutch flashes back to her childhood, where she was trained as a fighter by Khylen — as well as indoctrinated in a mystical rite where she occasionally receives a red box, with which comes an (deadly) assignment.

D’Avin winds up fulfilling the kill Warrant against Rolly, yet he and John are outnumbered by the party guards. That’s when a recovered Dutch arrives on the scene and fells the small army with a necklace of “beads” that turn into explosive beetles, as well as some sweet moves. In the aftermath, The Company agrees to waive the warrant against D’Avin, but Dutch still must answer to the RAC for going off-mission. And though her weasely RAC superior had wished for her dismissal (or more likely worse), he grumbled that he was “overruled” by… someone.

Later, after the team celebrates their narrow escape, D’Avin asks John just how much (which is frankly near-nothing) he knows about his well-trained partner. Meanwhile, Dutch retires to her chambers for the night, only to find on her bed a red box — as a look of worry/terror washes across her face.

What did you think of Syfy’s new space drama?