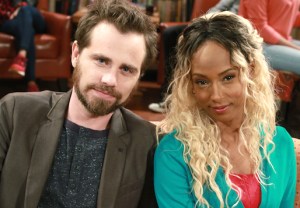 Friday’s Girl Meets World taught fans this valuable, albeit heartbreaking, lesson: Not all high-school sweethearts turn out like Cory and Topanga.

When news first broke that Trina McGee was making her long-awaited GMW debut this season as Angela, Shawn’s former flame, fans freaked out — and rightfully so. Of all the loose ends not yet tied up by the Disney Channel follow-up, the state of Shawn and Angela’s relationship was by far the loosest.

But fans should have been careful what they wished for (another lesson!), because Shawngela’s reunion was far from the romantic rendezvous they might have envisioned. Ms. Moore’s tragically brief return came on the heels of Cory’s lesson about the “devastation” caused by Hurricane Katrina — already a terrible omen, especially in a sitcom — and began with the news that Angela’s father is dead.

She then informed him that she’s been married for four years, that he’s the man who prepared her for marriage and that she’s insecure about having children with her new husband. “I need somebody who understands me to tell me if that could be true,” she told Shawn about whether or not she’s mother material. Naturally, he told her exactly what she needed to hear — that she’ll be an amazing mom — and sent her on her way.

Still, it made my soul happy to hear Angela tell him, “I really missed you,” even if it didn’t lead to anything romantic. “Let what we had make you ready for something,” she concluded. “Life knows what it’s doing.” Then, she kissed him (on the cheek) goodbye.

TVLine asked GMW creator Michael Jacobs to weigh in on #ShawngelaGate, specifically what led him to their current status, which he responded with the following statement:

Shawn’s relationship with Angela Moore had clearly ended in the original show, but … Shawn is the only person Angela trusts to help her make an important decision. In answering for Angela, Shawn also discovers something about himself, Riley and Maya. We all want these characters happy. Angela is. Shawn isn’t. The way it was and has always been.

–
And can we talk about the special appearance by Shawn’s dad Chet? It might have only been a vision, inspired by Angela telling him that she still sees her own father, but our emotions during his cameo were totally real. Maybe… too real.

Boy Meets World fans, are you saddened to see what’s become of Shawn and Angela? Or do you applaud Girl Meets World for taking an accurate, realistic approach in telling the former couple’s story? Drop a comment with your thoughts below.