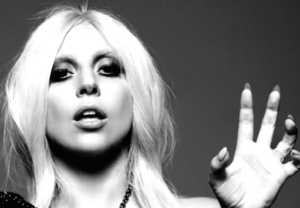 Responding to rumors that Gaga’s casting — and the subsequent hiring of vocally-gifted thesps such as Cheyenne Jackson and Matt Bomer — suggests Season 5 will have a musical bent, exec producer Ryan Murphy maintains that nothing could be further from the truth.

“People, keep saying to me, ‘What numbers are they singing, what numbers are they singing?’ and I say, ‘There will be no numbers,'” he tells our sister site Deadline. “The interesting thing is we cast a lot of singers this season, but I like that singers — for the most part — [tend to be] great actors, because they know how to sell a story through song. I’m excited about that and I think that’s why Gaga was excited about it; it’s not something that she’s ever done before.

“It’s a pure acting part,” he maintains of Gaga’s role. “I think people expect that she’s going to be sitting in a bar in a white silk gown sort of singing songs — she is not.”

Murphy also notes that AHS: Hotel will be “much more horror-based” and “more dark” than its predecessors, adding, “It’s… a little bloodier and grislier I think than anything that we’ve done before. It’s straight horror this year.”

That said, Hotel shares some DNA with Season 1. “Murder House was very primal because everybody’s great fear is about the bogeyman under the bed in their house,” says Murphy. “And [Hotel] feels similar to me in that when you check into a hotel, there are certain things beyond your control. Other people have the keys to your room… You’re not exactly safe.”