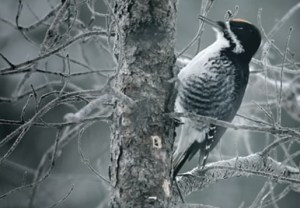 Only in Fargo can a woodpecker appear so ominous.

The FX miniseries has released a teaser for its upcoming second season, and although the short video only features the aforementioned bird and the sound of gunfire, it still communicates one very clear message: Season 2 is going to be grim.

Premiering in September, Fargo‘s sophomore run will take place in the late 1970s, during Ronald Reagan’s first campaign for President of the United States. As FX Networks CEO John Landgraf said in January, Season 2 will be set against “the cultural transformation that was going on at that time.”

The cast includes Bruce Campbell (Burn Notice) as Reagan, as well as Cristin Milioti (How I Met Your Mother), Ted Danson (CSI), Jean Smart (24) and Patrick Wilson (A Gifted Man).

Press PLAY on the video below for your first cryptic look at Fargo Season 2:

* Drew and Jonathan Scott, aka HGTV’s Property Brothers, will guest-star as themselves on Season 2 of Playing House, USA Network announced Thursday. They will appear in the Aug. 4 season premiere to help Maggie Caruso (Lennon Parham) remake her body into the “hottest property on the market.”

* Britne Oldford (American Horror Story) has been cast as the female lead in Syfy’s Hunters, a 13-episode adaptation of Whitley Strieber’s best-selling novel Alien Hunter, Deadline reports. In the series — which chronicles the disappearance of a Philadelphia cop’s wife, leading to a hunt for shadowy figures that may not be from this world — Oldford will play Regan, a valuable government operative.

* The Real Housewives of Beverly Hills‘ Brandi Glanville will not return to the series as a full-time cast member, due to bad blood between Glanville and the other housewives, E! Online reports. (A little help, Taylor Swift?)

* GSN has greenlit eight episodes of Hellevator, a horror-themed game show that asks a team of three friends to ride a haunted elevator into various levels of an abandoned warehouse, with one player getting out on each floor to complete a frightening challenge and earn up to $50,000 for the team. The show, which counts Jason Blum (Paranormal Activity, Insidious) among its executive producers, will premiere later this year.