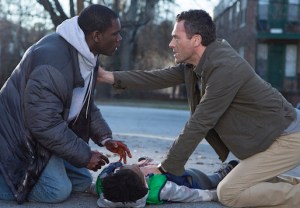 Jason O’Mara ran into Complications as the star of USA Network’s new Thursday-night drama. When compared to standard-issue medical dramas, is this fresh twist just what the doctor ordered?

In the 10-episode series, O’Mara plays John Ellison, a suburban doc who, still processing his daughter’s recent death (and while in the course of rushing an ailing squirrel to the vet), lays witness to a drive-by shooting. John leaps out of his parked car and tends to the critically wounded victim — Antoine, the 11-year-old son of the Vine City Crew’s incarcerated gang leader, “EZ” Tyler — only to find his curbside triage interrupted by the returning shooters. John picks up a gang member’s discarded pistol and fires at the approaching vehicle, killing the driver (with uncanny aim), but the passenger flees.

In the aftermath, John is hailed as a hero back at the hospital (if not by the cops), but the incident is far from over. Rather, the Latino Nortenos Locos gang first tries to sneak someone into the hospital to finish the job, now that Antoine is out of surgery, but John spots and snuffs that plan. Later, as more and more hoods ominously populate the ER waiting room, 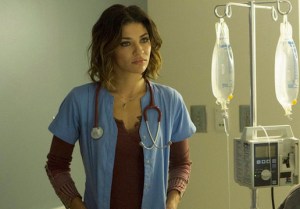 John enlists a rule-bending nurse, Gretchen (Gossip Girl‘s Jessica Szohr), to sneak Antoine off to a nearby surgery center under a false name — while he creates a distraction by going positively apes–t on the loitering punks.

Antoine is hidden away and recovering, so all is good, yes? No, John learns, when Vine City Crew No. 2 Darius (Gotham‘s Chris Chalk) pays his house a visit in the middle of the night, spooking wife Sam (Leverage‘s Beth Riesgraf). Darius makes clear that the good doc is to keep Antoine safe, availing himself of the gang’s resources (via a burner phone) when needed. 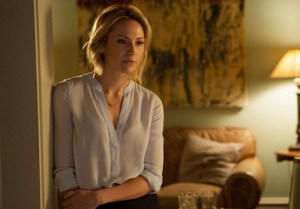 when John discovers that Antoine has gone missing at the surgery center. To help search for the boy, he enlists a Mexican nurse, raising Darius’ suspicions, but eventually they discover that the kid had faked sedation and went to hide in the basement. But still, no flowery “Thank you” card from the Vine City Crew!

Gretchen meanwhile has her own rogue tendencies, in the first episodes fudging an abuse victim’s charts to get her admitted for possible meningitis, so as to nudge the gal into seeking help. All the while, by-the-book Dr. Bridget O’Neil (Grey’s Anatomy‘s Lauren Stamile) keeps a watchful eye, especially given John’s recent outburst in the waiting room, a bit of behavior for which he now answers to shrink Constance Zimmer.

What did you think of Complications‘ intense first two hours?