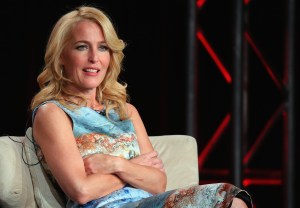 The X Files‘ Dana Scully is officially back to work, but she almost slept through her alarm clock.

“It feels like it’s been a long time since I’ve played her,” says Gillian Anderson of her role in Fox’s hotly anticipated, six-episode revival of the sci-fi franchise. “I can’t remember what year the movie was, but it felt like [Scully] was further away from me than I’d thought she would be. But I’ve also worked really hard at putting her entirely to sleep, so that was successful; she’s just taken longer to wake up.”

Anderson has only seen the first two revival scripts — the third is sitting in her inbox, she admits — and while the experience has been a good one, it’s also “strange to be back here,” she says. “This is a lot of flashbacks, a lot of deja vu, a lot of remembering dynamics — and it’s… a thicker substance to wade through than I’d thought.”

Asked to describe the season premiere in three words, Anderson takes a long pause. “‘Slow.’ ‘Intense.’ And it’s setting groundwork, so it’s got a particular role to play. It does exactly what it needs to do. What’s a single word for fulfilling that requirement? ‘Functional’? ‘Appropriate’? ‘Functional’ works,” she says with a hearty laugh. “Slow, intense and functional!”

As for Agent Scully herself, Anderson — who is a regular on NBC’s Hannibal this season — giggles that “She’s older! She aged!” since we last saw her. Beyond that, though, it’s “tricky” to pinpoint how the iconic woman of science has evolved. “Anything I say is going to sound like something you’re not going to want to watch. But that’s not the case,” the actress promises. “It’s just… I don’t even know. That’s a hard one. I appreciate the question, but I can’t answer it.”

The X-Files returns to Fox on Sunday, Jan. 24, 2016. In addition to Anderson and David Duchovny (as Fox Mulder), cast members Mitch Pileggi and William B. Davis, series creator Chris Carter, and writers-producers Glen Morgan, James Wong and Darin Morgan will be on hand for the event series.

Do Anderson’s teases have you more excited to discover whether the truth is out there? Sound off in the comments!