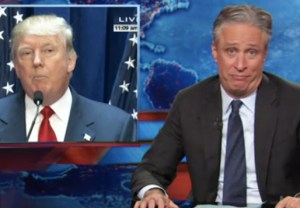 It was the question on every Daily Show fan’s mind when Donald Trump announced his bid for President of the United States on Tuesday: What will Jon Stewart say? (The man does, after all, lovingly refer to Trump as “F–kFace Von ClownStick”.)

And to say that Stewart didn’t let his fans down would be an understatement.

“Like many of you, I heard some interesting, let’s call it, ‘news’ today about a certain, let’s say, ‘gift from heaven’ entering the presidential race,” he began during Tuesday’s episode. “Because, apparently, Huckabee-Santorum wasn’t farfetched enough. I’m here to tell you, the world right now is [mimics exploding head]. Whites are black, Trump’s running for president. … Does gravity still work?”

“I’m just really happy right now,” Stewart continued, after showing a clip of Trump descending to the podium on an escalator. “What an entrance! … And what followed was over a half hour of the most beautifully ridiculous jibber jabber ever to pour forth from the mouth of a bats–t billionaire.”

In the end, though, Stewart had nothing but gratitude for the (former?) Celebrity Apprentice host, saying, “Thank you, Donald Trump, for making my last six weeks my best six weeks.”

Hit PLAY on the video below for Stewart’s full Trump take-down, then drop a comment with your own thoughts on our potential POTUS.