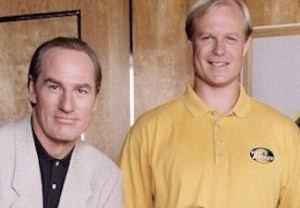 The follow-up series, which will again star Craig T. Nelson as Hayden Fox, picks up 18 years later when Hayden interrupts his retirement to become assistant coach to his own grown son, who is the new head coach at an Ivy League school in Pennsylvania that is just starting up a new team.

According to Deadline, Jerry Van Dyke may also guest-star on the revival as assistant coach Luther Van Dam. Coach will debut at midseason.

* Transgender teen Nicole Maines, who last year won a discrimination lawsuit against her high school, will guest-star on the June 23 episode of USA Network’s Royal Pains as Anna, a transgender choreographer who Hank discovers is taking hormones that are harmful to her health.

* Annie Parisse (The Following) and Ken Marino (Marry Me) will recur on HBO’s untitled rock ‘n’ roll series from Martin Scorsese and Mick Jagger, Deadline reports. In the drama — which explores the drug- and sex-fueled music business of 1970s New York — Parisse will play a tough record company publicist, while Marino will play a cunning A&R executive.