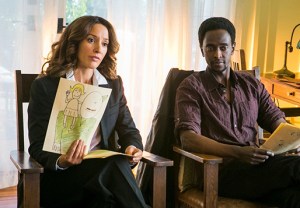 Although she has experienced great tragedy in her life, Proof‘s Dr. Carolyn Tyler has also witnessed miracles. Not only did she survive a near-drowning experience herself, but five minutes into Tuesday’s premiere, she watches a teenager come back to life after flatlining in surgery.

But suggest the idea of life after death to Carolyn — a brilliant cardiothoracic surgeon — and you might as well have recommended she start DVRing Long Island Medium.

And yet, Carolyn (played by The L Word‘s Jennifer Beals) is asked not only to consider the possibility of an afterlife in TNT’s new medical drama, but to research and provide scientific evidence of it.

The task is given by Ivan Turing (Matthew Modine, Weeds), a terminally ill billionaire who offers up his entire estate — $10 billion! — in exchange for any real proof that something is awaiting him after his life ends. To make his argument even more persuasive (and/or creepy; you decide), Ivan recites all of Carolyn’s most personal experiences back to her, including her near-fatal experience on a capsized boat in Japan and the recent death of her teenage son. Wouldn’t Carolyn want to know if she could somehow see her late child again?

Ivan’s offer piques Carolyn’s interest enough that she looks into the case of Lilly, a young girl who once spent five days in a coma at Carolyn’s hospital. When Lilly woke up, she told her parents of “The Other Place” she visited when she was asleep, then drew pictures of people she’d never even met before, including a grandfather who has never been mentioned in her family tree.

Later in the hour, Lilly is brought back into surgery for a blood clot in her brain, and when Carolyn asks the girl if she visited “The Other Place” this time, Lilly cryptically informs the doctor that “they” told her not to talk about that place anymore. (Does ABC’s The Whispers need any more unnerving little kids? Because I think I might’ve found one.)

It’s this spooky interaction with Lilly that convinces Carolyn to commit to the afterlife research; in exchange, Ivan will make sizable donations to foreign countries that need medical assistance. At first, the research doesn’t seem like it will interfere with Carolyn’s daily life — but that becomes a lot less likely when during a morning run she encounters a mysterious woman who disappears as soon as a bus passes by. (Funny how that always happens, isn’t it?)

OK, your turn. What did you think of Proof‘s debut hour? Grade the episode via our poll below, then hit the comments to back up your choice!