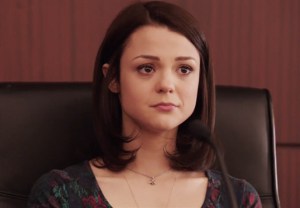 Come on, did you really think Finding Carter would go on hiatus without first introducing a game-changing twist to leave fans choking on their croutons?

In the final moments of Tuesday’s summer finale — which also featured Madison’s exit, Max’s reunion with Taylor and a mind-boggling custody trial — we met Ben, who claims to be the biological son of Lori Stevens and… wait for it… David Wilson. [Insert infinite screaming emojis here.]

Yes, Carter’s already-complicated family tree just sprouted a brooding new branch, and TVLine got executive producer Emily Whitesell on the line to discuss the epic twist — along with what else we can expect to see when the show returns.

Who’s ready for some answers?

TVLINE | Going back a bit — and I feel like I know the answer to this, but I want to be sure— why did you decide to kill Kyle?
I think we made good use of the character for what we needed, basically. The actor wouldn’t have had very much to do moving forward, based on the fact that Elizabeth and David have gotten back together. There’s something interesting about someone remaining in your life who you’ve been involved with and now you still have to work with — but for the actor, I felt like that wouldn’t interest him a lot. And because it’s such an emotional thing for her to lose him, I thought it’d be great for Elizabeth’s character, which is also something we like to service. And we were sorry to see him go; We loved Eddie so much.

TVLINE | I’m glad Carter and Taylor are already over the Max thing; I was worried that would be dragged out for the rest of the season.
We felt like there’d already been so much conflict between Taylor and Carter. We like their relationship and wanted to get back to the closeness of the sisters, and Taylor had already struggled with so many things. It was also important to us to show that when it’s your family, when it’s your sister, you can forgive. We wanted to get back to the Taylor that we knew so we could send her on other paths in the future. 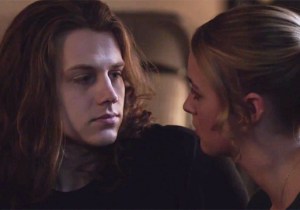 TVLINE | Will it be full-steam-ahead for Max and Taylor, or will the Carter incident still haunt them?
I love the Max-Carter relationship and the very deep friendship between them, so I think we’ll always continue to play that. But I also love the idea of getting back to Max and Taylor and not having [him sleeping with Carter] haunt them. He made a mistake, and when that happens, you just have to move forward and keep living your life. It doesn’t have to destroy everything you had. Those kinds of teenage friendships that can turn in a moment, or that once were something and now they’re not … constantly evolve. You change your feelings about people, but that doesn’t mean you stop loving them or you can’t be friends with them. All three of them are so mature, so the fact that they can move past it was really important to me.

TVLINE | Speaking of people who made mistakes, have we seen the last of Madison?
We’ve seen the last of her for now. We wanted to bring her in to play the role I think she executed really well: the idea of bringing yet another person back from Carter’s past that we could use to fill things in a little more and get a feeling for what her life had been before so we could keep it alive. In many ways, Max also fills that role, so we just needed Madison for the season. We’re moving on to other places and towards a more Carter-centric dynamic coming up.

TVLINE | I feel like the Bird-Madison fans will be disappointed.
And I love that that relationship took place, but as we all know, Bird has many different colors. I think we’ll all be very surprised to see what she does next.

TVLINE | And what about Damon? Bird doesn’t want him and Gabe doesn’t seem to care about him. What’s your plan for him?
We’re going to take a bit of time with him. There was so much going on when he was first introduced, so we were in a bit of a rush. We planted the seed that he has a crush on Bird, and I like the dynamic of this very cool, daring girl with this very nerdy, normal, straight-laced guy. … We’re going to play out that relationship/friendship in a different way.

TVLINE | Moving on to the trial, did you research any real-life cases when writing this? I can’t imagine this would actually hold up.
Oh, yes. In doing our research, it became apparent that Virginia state law has some loopholes for parents who have abducted their own children. They’re very lenient about penalizing them, and we all know juries are insane and can do whatever they want. If Lori and her attorney could prove that she was, at some point in time, Carter’s mother, she could get off with time served. It was real, so we decided to use it.

TVLINE | Carter made it clear she doesn’t want to be with Lori, yet Lori remains intent on gaining custody. What’s her endgame?
First of all, Lori’s just trying to get out of jail. That’s certainly one of her endgames. We also explored the aspect of her mental illness; when she’s medicated, she’s pretty damn terrific. A lot of what happened isn’t always her fault. I felt like we spent a lot of time making that a real, sympathetic thing. … But then there’s this trial, which is so crazy, so we really wanted Carter to say, “I’m fed up. I’m done with this.” She can’t live this way anymore, so it was time for her to be fed up a little bit with everything we’ve put her through. 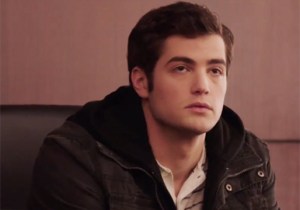 TVLINE | Have Ben and Lori known about his parentage this whole time? Why did they wait until now to reveal it?
These questions will be answered very early on in the next sequence of episodes. But he didn’t know. He was subpoenad. They’d been looking for him for a very long time, and Lori will claim she’d been looking for him for years, so he’ll have his own resentments about everything.

TVLINE | Is Ben’s sudden presence in David’s life going to be an issue for his marriage?
Elizabeth knows what to be supportive about and what not to be; we’re not going to rehash the “Oh, you slept with her” thing. We’ve played that out extensively. But she’ll have feelings about what he should do, and we’ll see she’s resentful of certain things, but I don’t think we’re going to play anymore “How could you have done this?” stuff. We’ve seen all that before.

Finding Carter fans, how surprised were you by the big Ben twist? Will you miss Madison? And what are your hopes for Max and Taylor? Grade the finale below, then drop a comment with your thoughts.