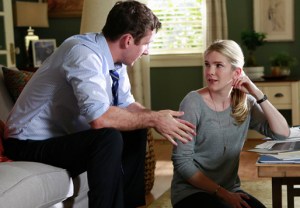 I can only assume that The Whispers‘ Sean Bennigan has never seen The Shining.

If he had, he would know that all work and no play only makes him a dull boy — or, in the case of Monday’s episode, a boy who is hell-bent on taking a doctor hostage and tracking down a nuclear power plant in the middle of nowhere — oh, and getting a close shave in the bathroom of a rest stop.

Indeed, it’s a good thing Milo Ventimiglia has had experience playing grade-A brooders like Gilmore Girls‘ Jess Mariano and Heroes‘ Peter Petrelli. Otherwise, he may have read the first few Whispers scripts and asked himself, “How is it possible that my character doesn’t crack a smile in the span of three full episodes?”

But the mystery of Sean Bennigan — and what on earth his role in the Drill conspiracy could be — was just one of many puzzles that needed solving in this week’s installment. Here’s what else went down in the hour, titled “Collision”:

THE UNHAPPY COUPLE | Before we pick up in the present day with Sean (and his begrudging road trip companion, Dr. Benavidez), we learn a bit more about Sean and Claire’s rocky marriage, via flashback — more specifically, a revisiting of the night that Sean left Claire, choosing instead to volunteer for the very mission that killed him, rather than stay home and attempt to work through her infidelity with Wes. During the tense exchange, we learn there was an incident two years ago that affected the couple’s son, Henry — perhaps the same incident that caused him to go deaf? — and it’s something that has caused Claire and Sean to become distant. And although Sean doesn’t exactly come off like World’s Best Husband in the scene, Claire is burdened with even more guilt when Sean asks, “Do you love [Wes]?” She insists she doesn’t, but the pause before her answer is just a second too long to make her claim convincing.

After telling her (understandably skeptical) mom that Sean is alive and on the run, Claire takes the search for her husband into her own hands. In Sean’s bag, she finds a receipt for a Middle Eastern bakery, with a series of numbers scrawled on the back. Initially, the bakery — which is being used to distribute illicit overseas money to its customers — seems like a dead end, when the owner insists he has never seen Sean before. But Claire presses the issue with the owner’s wife in the kitchen, who informs the agent that Sean has also been receiving payments from the bakery: one of them just a day ago, and another about a month ago (aka the same time that Westings Designs was blown up).

BLOWING IT OUT OF PROPORTION | Meanwhile, Wes and his DoD team look over the surveillance footage from said Westings bombing, which shows young Jackson Bellings talking to the camera — and, presumably, to Drill — before ducking into one of the offices and detonating the bomb. After giving the footage a second glance, Wes realizes that Jackson was actually biding his time until David Miller — one of the eventual casualties of the bombing — went into his office. Wes’ team does a bit more digging and finds that David Miller was actually quite paranoid in the weeks leading up to his death, insisting someone was spying on him. Just before he lost his life in the explosion, David tried to send an important e-mail to the head of the Nuclear Regulatory Commission — who also happens to be the father of young Harper — but the e-mail was corrupted in transit.

Wes later meets up with Claire — with whom he so clearly wants to make out, it’s not even fair to Wes’ actual wife at this point — and informs her that Sean may be trying to cause a government “meltdown” via young kids in the neighborhood. That’s when Claire informs Wes that there’s an imaginary friend, “Drill,” involved somehow — and, knowing that his own daughter is in contact with Drill, Wes asks Minx to elaborate on the game that she and Drill play. She presents the same “maze” of paperwork that Drill had her print off Wes’ computer last week, and when Wes and Claire notice the symbol in the bottom-right corner, Minx informs them it’s the logo for the Harper Point Nuclear Power Plant… which is where Sean must be going next. With that, Wes and Claire are off!

ARREST STOP | The only government agent who has any real success tracking down Sean, though, is Claire’s partner, Agent Rollins. When Sean and Dr. Benavidez stop at a convenience store — in order for Sean to buy some much-needed razors and shaving cream — the doc slips Claire’s business card to the cashier while she pays him, then shoots him a few pleading looks as Sean leads her to the bathroom around the side of the building. The cashier — who couldn’t look less thrilled to be pulled into this mess — gives Claire’s office number a call, which is answered by Rollins. He and a few FBI agents head to the rest stop, hoping to bring Sean into custody, but by the time they reach the store, Sean and Dr. B are gone. They are, of course, on their way to the aforementioned power plant, although Sean repeatedly says that he won’t know why he’s going to the plant until he actually gets there. Dr. Benavidez attempts to thwart Sean’s plan by running her car off the road, but when she climbs out of the car and tries to escape, she’s stopped by an electric fence surrounding the plant — a fence whose electric current only Sean can turn off… with his hands.

* Dr. Rosen, a child psychologist, attempts to convince Minx that Drill is not only imaginary but very dangerous. Minx agrees to stop playing Drill’s game, but after she does, Drill gets his revenge on Dr. Rosen: While biking home that night, Dr. Rosen swerves in order to avoid a child standing in the road — no doubt one of Drill’s newest recruits — and ends up under the wheel of an oncoming van.

* While at the hospital, Harper’s dad gets a phone call from an unknown number. Harper silences the call — which I can only assume is also from Drill — then sends a(n oddly mature) text to the caller: “AWARE OF SITUATION. WILL HANDLE.” Harper then tosses her dad’s phone into a biohazard bin, and after completing this latest task of Drill’s, Harper’s mom finally comes out of her coma.

* After overhearing his mom and Wes discussing Sean’s plane-crash survival, Henry tearfully begs Drill to bring his dad home to him. “I’ll do anything,” Henry cries to Drill that night — and when the boy’s bedside lamp begins to flicker, we all know Henry will soon have to carry out an awful task.

What did you think of The Whispers‘ third episode? Does the show’s central mystery still have your attention?