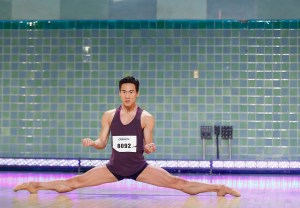 You can accuse So You Think You Can Dance‘s Nigel Lythgoe of a lot of crimes — aggressively leering at pretty young things; overtly or inadvertently ensuring that gay contestants never mention their sexual orientation on air* — but love him or hate him, the man is responsible for a pretty righteous Twitter feed. (*Correct me if I’m wrong on that, but I don’t recall one out-and-proud moment over 12 seasons… insert side-eye emoji here.)

Needless to say, then, I perked up over the weekend when the judge/exec producer dropped this bombshell on social media: “I truly believe Monday’s #SYTYCD has the best auditions I have seen in 10 years. An incredible Day One. All styles were great. #TheVeryBest.”

Oh, sure, hyperbole is as essential to the reality-competition genre as mozzarella is to pizza. But still, Nigel’s tweet set my expectations at Ricky Ubeda/Melanie Moore levels.

And while I’m not 100 percent sure SYTYCD‘s California tryouts lived up to the hype — Hour 1 was stellar, Hour 2 lagged like Jason Derulo trying to come up with a fresh adjective — they certainly got me more excited about the show’s “Stage Vs. Street” reboot than either of Season 12’s previous two episodes.

Without further ado, let’s get to my countdown of the five most promising Vegas-bound dancers from Los Angeles — or Los Angeleeese, as Cat Deeley would say.

5. James B-Dash Derrick | Krumper who came up under the inventors of the genre seemed to actually get stronger as his routine continued — making better use of the stage and throwing even more energy into his arm swings after the midway marker. Very much looking forward to his contributions to “Team Street.”

4. Avo Karapetyan | The night’s initial ballet dancer left Paula chanting “Oh my God!” over and over again — and for once, I kinda agreed with the loopiest panelist.

3. Jana “Jaja” Vankova | Season 11 returnee hits damn hard with her krump — and you can practically see all her gears in motion when she’s animating. Yet somehow, there’s a whimsy and joy to her moves that flies in the face of her aggressive movement — a juxtaposition that’s downright delightful.

2. Asaf Goren | Not sure if he really needed the “Hebrew Breaking” gimmick — the shofar and the prayer cloth didn’t really add much to the mood of his performance — but when he threw water down on the stage and took flight with a series of insane backspins, my fandom was sealed. (OK, I’ll admit, his abs won’t be hard to look at all season, either.)

1. Jim Nowakowski | Korean-American ballet combined Gumby-like flexibility with Hulk-like strength — along with an otherworldly grace neither of those green-hued pop-culture icons have ever exhibited. Raise your hand if you’d pay good money to see him headline for any major ballet company right this second.

OK, your turn. Who were your favorite hopefuls from the L.A. auditions? Sound off in the comments with your thoughts!