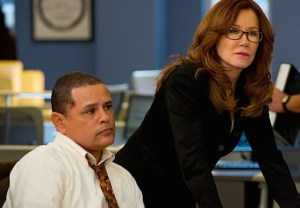 As Season 3 of TNT’s Major Crimes drew to a close, Detective Julio Sanchez successively was ordered to take anger management classes and then apparently suspended, for whaling on the “Burning Man” killer in the finale.

When Season 4 opened, Julio was returning to duty, meeting some mixed reactions. And in tonight’s episode (airing at 9/8c), show boss James Duff has said that series vet Raymond Cruz delivers an “amazing” performance, as we finally get to the root of Sanchez’s issues.

TVLine spoke with Cruz about peeling this final layer away from the man he has played across two shows, for 11 years.

TVLINE | What was Julio’s mindset, first setting foot in the MCD after his suspension?
It’s all about finding the courage to reappear after you’ve made a huge mistake, trying to get back on track and make yourself viable again, to help support the unit.

TVLINE | Is he humbled?
A little humbled, yes, and contrite. You have to realize that you’ve made a mistake and you have to own up to it. You have to come back and face the people who rely on you and you’ve kind of let down. It’s “walking the gauntlet.”

TVLINE | What does he make of attitudes like Flynn’s à la “I don’t want have to worry guy next to me exploding”?
It angers Julio. [Laughs] I also have to understand his point of view, but it kind of angers him because I’ve been his backup, I’ve covered his ass lots of times, and for him to just, like, turn and basically not trust me…. [Being an LAPD detective] is a very difficult job, having to deal with the lowest of elements on Earth, these terrible criminals, on a daily basis, dealing with their bulls–t when you know that they’re wrong. Julio facing that again…. Do you really want to go back to what caused the problem in the first place?

TVLINE | Will we get insight into how Julio addressed his violent tendencies during the suspension?
You’ll get insight into what motivates him and why, which is tremendous, because this has been brewing since the premiere of The Closer. That’s how long we’ve been with this character, so it’s a huge payoff. It’s like peeling layers off an onion, which we’ve been doing over an 11-year period, and now you get to the center…. It’s great for the audience because after being a “voyeur” into these characters’ lives for so long, you reach a point where you’re like, “Oh, I understand now.” All of a sudden it pays off in a huge way. You get this amazing moment that will just shock you.

TVLINE | James Duff was raving to me about your performance. Was this the most challenging material the show has given you?
Yes, definitely. Definitely. I’ve had some really challenging things to do on this show, but this… this was probably the hardest to pull off — and it was the most gratifying. A lot of work went into it. 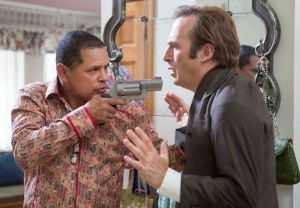 how they address each other…. We’re like, “Whaaaaaat?” [Laughs]

TVLINE | Lastly, how fun was it for you to revisit Breaking Bad‘s Tuco Salamanca on Better Call Saul?
I don’t think it was anything “fun” about it. [Laughs] It was amazing to go back and to do this prequel [spinoff], to process the character at a different time in his life. It takes such high energy to pull off Tuco.

TVLINE | Talk about anger issues!
I don’t really see Tuco as “angry” [Laughs] — he’s just a live wire. It’s like he has no filters. It’s all immediate response, response, response. That’s what I love about that character, is you don’t have to guess what he’s thinking!