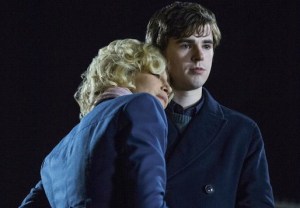 A&E clearly has no reservations about keeping Bates Motel in business: The cabler has renewed the Vera Farmiga-Freddie Highmore drama for Seasons 4 and 5.

The move amounts to a 20-episode pickup, and ensures that co-creators Kerry Ehrin and Carlton Cuse will get to finish out what they have long billed as a five-season tale. However, A&E’s announcement stopped short of declaring Season 5 the show’s last.

“The vision of our incredible creative team has exposed the steady breakdown of the relationship between Norman and Norma Bates,” said Rob Sharenow, Executive Vice President and General Manager of A&E. “We are thrilled to bring fans two more seasons to witness the next stages of Norman’s transformation into the most notorious psychopath in cinematic history.”