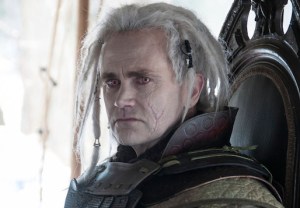 Syfy’s Defiance opened Season 3 with the introduction of two new kinds of lethal adversaries — both of which left their mark, as well as threatened to do further damage, by the end of the two-hour opener.

WHITE SUPREMACY | On the hunt for crazy Pilar, who in the finale had left town with son Quentin, pregnant daughter Christie and son-in-law Alak, Datak, Stahma and Rafe crossed paths with General Rahm Tak aka “The Beast” (played by Oz‘s Lee Tergesen). To curry favor with (or at least avoid death at the hand of!) the infamous Castithan, the Tarrs pretended to have captured Rafe, then joined the general in trash-talking the humans.

It’s when the ear-eating, Johnny Cash-quoting general discovers that some humans are nearby — that would be Pilar, Christie (who has since given birth to a son, named after her deceased brother Luke) and Quentin — that he truly earns his ominous nickname. Arriving at Pilar’s safehouse, Rahm Tak scoffs at Quentin’s cred and pops the lad in the noggin. When Rafe storms the place and attempts to stop the general’s goons from assaulting his family, 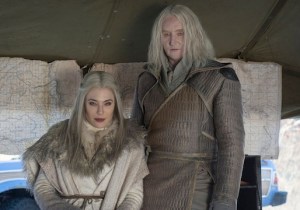 he is perforated by a hail of bullets. Completing the deadly trifecta, the general tasks Stahma with taking a charge blade to her daughter-in-law — or else Datak dies. With both women realizing that to let this play out will help conceal baby Luke’s hiding place, Christie declares, “I’m not afraid,” paving the way for Stahma to slit the new mom’s throat.

After everyone clears out and Rafe uses his last breaths to urge Alak to forget this tragedy and love his new son as much as he loved Christie, Pilar spirits Alak and Luke away to a “borrowed” mobile home — only to disappear with her grandson in the middle of the night. Later, Rahm Tak compels Datak and Stahma to act as his spies inside Defiance, or else he’ll kill Alak, whom his team found searching for his son.

PURPLE REIGN | Elsewhere, we met T’evgin and his daughter Kindzi, members of the presumed-exterminated, purple-skinned Omec race, as they freed Nolan and Irisa from that pod in the process of scouting out the gulanite mine. Returning to town, Irisa was met with part contempt/Berlin beat-downs, for her rep as a killer of “everything,” and part geek-boy adulation, 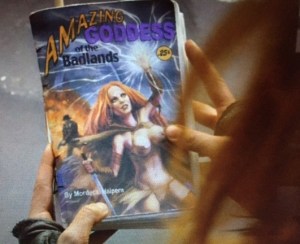 as the scantily clad subject of a graphic novel series.

After Nolan gets up to speed on the town’s gulanite shortage and resulting crippled defenses, he, Amanda and Irisa check out the mine, where they run into Kindzi. Amanda winds up shooting the young Omec, who then is put into lock-up, where she is taunted through the window by some boys. Kindzi takes the metal rod the bookkeeper’s son is cruelly jabbing at her and thrusts it back at him, fatally impaling him — suggesting to horrified onlookers that the Omec are very much the devils that Votan lore painted them as.

In the street riot that follows, Kindzi is badly wounded, requiring Doc Yewll to make a most unwilling sacrifice, since T’evgin can use Indogene tissue to repair his daughter. The squabbling sides then arrive at a truce — the Omec will use their mining tech to help replenish Defiance’s gulanite supply, in trade for a cut of the haul, which they need to repair/refuel their ship. But unbeknownst to Mayor Amanda et al, said ship is filled to the gills with hundreds upon hundreds of in-stasis Omec, poised to eventually awaken and “Conquer, Kill, Devour” Earth, Defiance included!