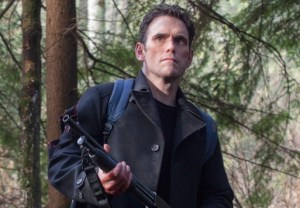 Warning: The following contains an Abby-normal level of spoilers from this Thursday’s episode of Wayward Pines.

This week on Wayward Pines, midway through the Fox drama’s 10-episode run, Ben Burke as well as viewers learned that the question we should have been asking all along was not “What is Wayward Pines?” but “When?”

Because the year that Ben, his folks and the other last remainders of humanity are living in is 4028. Yes, more than 2,000 years into the future. This is where you join me in bellowing:

The time jump was actually the second “shoe to drop” in the episode. Because prior to quizzing Ben about the ancient coin she had given him — a quarter minted in 2095 — Mrs. Fisher revealed that the  fence is protecting Wayward Pines from Aberrations (or “Abbies”), mutated, violent descendants of humans. Ethan meanwhile tussled with at least one Abby while exploring the area beyond the cliff, before bumping into David Pilcher (aka “Dr. Jenkins”), the scientist who foresaw the Aberrations and constructed Wayward Pines as an “ark” to save humanity.

To help you process this download during the show’s one-week hiatus — Episode 6, airing June 25, details how exactly Ben, Kate et al were “brought” to this time and place —  TVLine invited showrunner Chad Hodge to discuss his modifications to the book trilogy; explain the importance of his own creation, the First Generation; and answer our most burning question.

TVLINE | I haven’t yet gotten to Blake Crouch’s Wayward Pines trilogy, but I understand that you veered somewhat in how you delivered the reveals?
Right. I think I told you when we last talked in New York that all three books are covered by the 10 episodes. So if I had strictly followed the plot of the first book, we would have gotten to the truth in Episode 3, which would have been a little rushed. I wanted to dive a bit more into the characters and the town before we got to the truth.

Episodes 3 and 4 were sort of a deeper dive into what was going on in Wayward Pines, and bringing in Ethan’s family, which happens differently in the book, and then sort of seeing him take on the job of sheriff. And as you meet all the characters, you see how the town sort of works, how most people just sort of accept the job that’s given to them and do as they’re told, because otherwise you get killed in front of the entire town, as Beverly did. Most people are like Carla Gugino’s character, Kate, 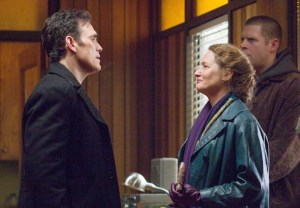 who even though she’s trying to figure out what’s going on is still working at the toy store, she’s married to this guy… she follows the rules.

And in Episode 4, Ethan takes on this job as sheriff – which probably is the role that was designed for him in the town. You actually see it in Episode 5, when Theresa finds his file and his job is listed as sheriff. Had he been not our hero and not a former Secret Service agent and not the guy that he is, he might have eventually fallen into this role of sheriff and accepted it and gone along and been another person who works in Wayward Pines.

TVLINE | As for the facts as laid out by Mrs. Fisher, did you tweak anything there? About the Abbies, their origin, the time lapse… any of that?
All of the mythology is exactly the same as it is in the book. I didn’t play with any of that whatsoever. The only thing that’s different is the way the information is laid out. In the book, when Ethan gets beyond the cliffs and out into the wilderness and runs into Pilcher [fka Dr. Jenkins], 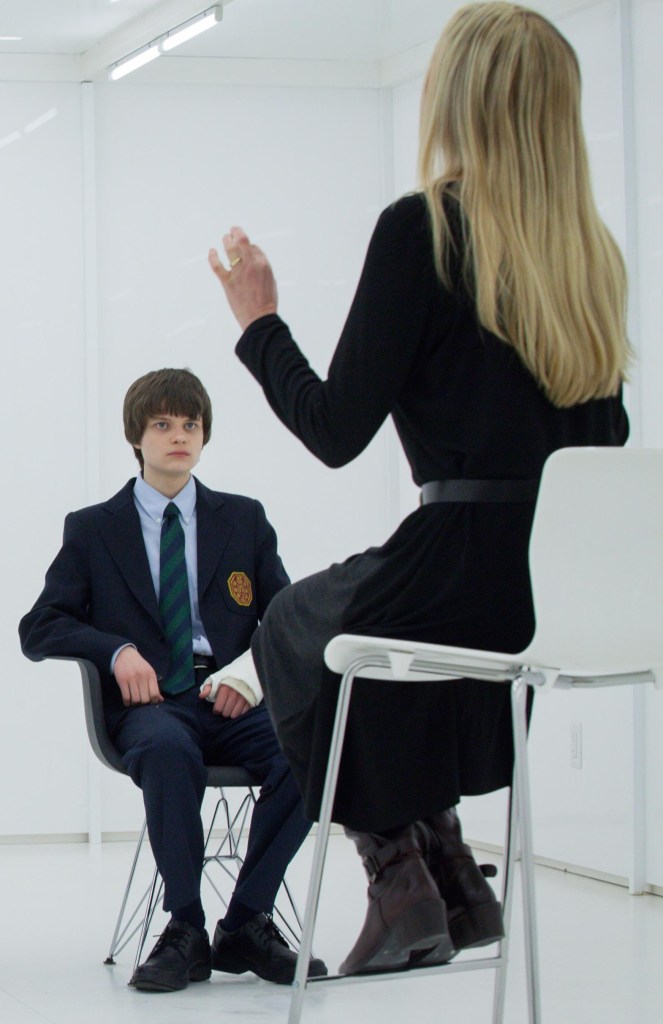 Pilcher is the one who tells him everything. There’s nothing with the kids in there.

TVLINE | Oh, the First Generation isn’t part of the books?
No, that’s something that I created for the show, mostly thinking that the future of this town and the last of humanity is going to be these kids, so ideally nobody would be in the dark. What you’ll see is that there are reasons that they had to keep the adults in the dark, because as Megan Fisher hinted, adults can’t handle the truth. I liken it to when you’re in third or fourth grade and your teacher teaches you about the planets and space and galaxies, all of this stuff that you can’t actually see or touch but you accept it and you learn it and you don’t think it’s crazy. But if you knew nothing of that and you’re a 40-year-old guy, and someone on the street tries to sell this “bill of goods,” that there are nine planets out there, you’d think this person was crazy, because as adults you can’t accept things like that. But the mind of a child… is much more open to new ideas. Telling them and making them feel special and all of that is integral to Wayward Pines and to the way that Pilcher envisioned it.

TVLINE | What’s Ben going to do with this information?
I’ll let you wait and see what Ben does with it. What I can tell you is that hopefully it was somewhat clear that Ben was coming from a life in Seattle where maybe he wasn’t the happiest. He was a little grumpy and maybe didn’t have so many friends. He didn’t have a girlfriend. And here he’s not only been welcomed into this group but sort of like put up on the stage and told, “You’re important and you matter and we trust you.”

TVLINE | So his mindset might be: “Don’t rock the boat.”
Yeah, it’s a big thing for any kid — for anybody, but especially a young person — to be told you’re important and we trust you. What he’s going to do with this information is interesting. A lot of the latter half of the season is about, “Is Wayward Pines a good thing, a bad thing? Is it as simple as good and evil, or not?” If we’ve done our jobs, you’ll constantly be changing your mind about that.

TVLINE | In the aftermath of the big reveals, one thing in particular doesn’t track for me: Sheriff Pope’s 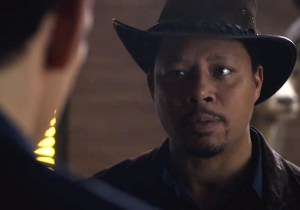 own origin story is revealed in the next episode, but it’s not addressed why he went on to become such a sadistic lawman.
I think he probably got power hungry. Imagine being told that you’re the boss of the last 500 people on the planet — some people, if they’re not wired correctly, could take that power and abuse it, which is what Pope did. And Pilcher recognized that it was getting a little out of hand. Yes, there have to be strict rules in this town, different from what might be considered normal rules and punishments in our world, but Pope went and took that a little too far.

[BOOK SPOILER IN NEXT PARAGRAPH] I know you haven’t read the books but Pope’s death happens differently and might make it a little clearer, because when Pilcher comes out to find Ethan in the wilderness, as in Episode 5, Pope is with him. He’s not dead yet. Then when they have to rush back onto the helicopter in order to avoid the Abbies, Pilcher purposely leaves Pope out there with the Abbies. He wanted him to die.

TVLINE | I may read the books now, just for that scene!
Sorry if I spoiled it for you!

TVLINE | How confident are you in your depiction of a 2,000-year time jump? Did you  research what the world might look like in 4028, how aged an Interstate sign would be…?
We definitely did a lot of research, especially with our production designer, Curt Beech, who did a fabulous job. Essentially what we wanted to show is what the world would look like after 2,000 years without human intervention or pollution or destruction. If we all died out, the planet would probably redevelop and be more green and more beautiful, be the planet that it should be without every horrible thing that we’re doing to it.

TVLINE | What’s your favorite episode beyond the next one, in which Ben gets a look “behind the curtain”? Carla Gugino raved to us about 9, but she didn’t get into why.
I was going to say 9. I have a very special place in my heart for that one; I don’t want to reveal too much about why. It was directed by Nimród Antal and it’s very focused on the First Generation, I’ll say that. It’s an incredibly well written script by the Duffer brothers and directed wonderfully by Nimród.

TVLINE | Are there any additional bombshells that we won’t have been made privy to through Episode 6? Like, is there something Mrs. Fisher omitted?
I won’t answer that. But there are constant reveals through the rest of the show, always. There’s always something that you didn’t expect, a twist and a turn.

TVLINE | Will readers of the books be at all surprised by your season finale?
I think they’ll find it very similar to the books with a few tweaks here and there. Again, the First Generation is not a part of the books in the way that it is in the series, and they figure in in a major way in the ending. So there are some differences. But globally and schematically and mythology-wise, it’s all the same. I’m very close to Blake Crouch, the author, and everything was sort of put through his filter the entire time.

TVLINE | I heard there’s a hint of places to go in Season 2, should Fox want one…
There’s a hint of it, but Wayward Pines was always designed to be just these 10 episodes. So the promise that we’ve been making — which is that there’s a beginning, middle and end in these 10 episodes — is a real promise and we deliver on it. Could there be a possibility of a Season 2? Sure, of course, and you’ll see a window to that, but it also is a complete ending as it is.

Want more scoop on Wayward Pines, or for any other show? Email insideline@tvline.com and your question may be answered via Matt’s Inside Line.