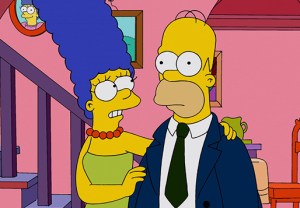 The Internet has been freaking out all week over “news” that The Simpsons‘ Homer and Marge are headed for cartoon divorce court, a revelation that snowballed into countless tweets, Facebook rants and think-pieces since hitting the web on Sunday.

But here’s the thing: No one is divorcing anyone.

So how did this whole mess get started? In a nutshell, executive producer Al Jean spoke with TVLine’s sister publication Variety — the interview is a great read, for the record — and mentioned that, in an upcoming episode, “Homer and Marge legally separate.”

If you know anything about The Simpsons, you know that storylines — save for major deaths — rarely stretch beyond a single episode. And if you were a true Simpsons historian, you’d recall that Homer and Marge have already divorced once before; he filed back in Season 8 in order to re-marry her as the kind of man she deserved. They also re-married again in Season 20 after discovering that a clerical error voided their previous re-marriage.

But this is the Internet, where people often act first and think never, so Springfield’s powers that be were forced to set the record straight. Even the official Simpsons Twitter account got involved Wednesday, posting these couldn’t-be-more-clear refutals of the divorce rumors:

Yet the public remained convinced that the show’s “it” couple was headed for Splitsville, forcing Jean to tweet about the issue again on Thursday, directing panicked fans to his original interview.

And on that note, let’s all agree never to speak of this nonsense ever again — until, of course, the episode airs this fall, at which point uninformed fans will likely freak out anew.

Your thoughts on this (hopefully dead) scandal? Drop ’em in a comment below.