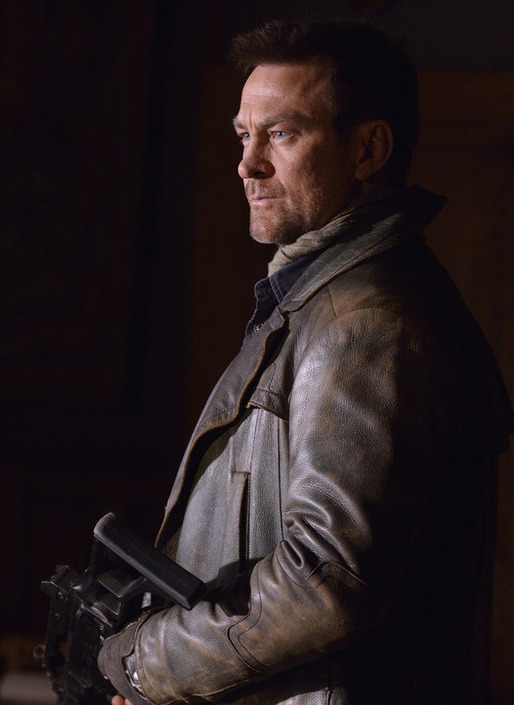 It is, as Grant Bowler aptly puts it, “a Defiance sandwich” in Season 3, as the beleaguered titular town finds itself caught between two new, lethal foes — one of which wastes no time in thinning the herd.

As the Syfy drama’s new season opens Friday at 8/7c (with a two-hour premiere), TVLine welcomed the opportunity to discuss with the Kiwi actor all that lies ahead, including Irisa’s status as a pulp novel pin-up, Nolan’s big (but welcome!) setback and the several shocking sendoffs.

TVLINE | When last we tuned in, Nolan and Irisa had been entrapped inside some strange pod….
I am constantly made anxious by the fact that they do their best to kill me at the end of every season.

TVLINE | Hmm. There is a pattern.
And I wonder if it’s just to keep me under control? Because, like, I’m dead or near-dead or hopelessly close to dead at the end of seasons. So, I never rest easy in the off-season. I think it’s maybe more that they just don’t want me getting too comfortable.

TVLINE | After Nolan and Irisa are mysteriously rescued and they get back to town, is it safe to say they’re persona non grata?
Well, her definitely — and I saw it being a little challenging for Steph[anie Leonidas] to play. 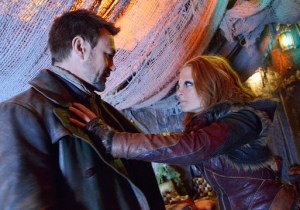 Her character is being actively hated in some ways, and that’s never comfortable. When you’re an actor doing your plays at school, you pretend, but by the time you’re doing it for a living it actually has to happen. And being hated like that is horrible.

TVLINE | Especially in the context where being hated means you’re regularly getting pummeled or slapped down by Berlin or whomever.
Slapped around, spit on, all that kind of stuff. So, yeah, there’s very much that, but then there’s also the more off-putting thing going on where Irisa has been turned into kind of a serial novel heroine.

TVLINE | I liked that twist, because it’s organic. In real life, that would happen.
Exactly. I loved it. When [executive producer] Kevin [Murphy] told me about it, I was in Heaven. Because you’re exactly right, it’s such a natural thing to have happened. So, she’s got this horrible dichotomy going on where she’s vilified on the one hand, or being held up as this impossible kind of creature — and neither picture is remotely close to who she is. And at the same time we have her overwhelming guilt about all of the mayhem, death and destruction that has occurred at her hands. She’s in a world of hurt at the beginning of Season 3, but then she bloody well deserves to be, mate. It only makes sense.

TVLINE | Talk about the two new threats that are on tap for this season. The Omec and the General. 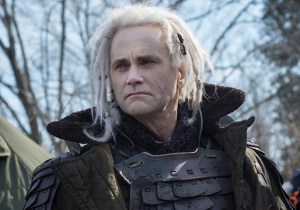 Firstly, let’s do Rahm Tak. Lee Tergesen (Oz) plays him with an enormous amount of glee, it looked like to me. I think he loved every second of it. He’s a little too comfortable in a wig for my liking, but he was phenomenal. Rahm Tak is a genuinely frightening character, because in a way he’s so charming, funny and compelling. He’s adored by his men, which makes him such a dangerous threat because he’s a popular leader. And his stated goal is to burn Defiance to the ground and to kill every single human being that lives in the town.

TVLINE | Yeah, it’s not like E-Rep, which was theoretically doing it for the better of society, or whatever their version of society was. This guy is doing it for kicks.
That’s right. [E-Rep] was institutional, they were just expanding territories as a function of their idea of what should happen next. It was non-personal and in some ways improved the town. Well, Rahm Tak doesn’t want to improve the town; he wants to put a bunch of human heads on stakes. And then in the midst of this, we get the arrival of the Omec and these guys are a different kettle of fish entirely. The two principles that we meet in that first block of episodes are the father, T’evgin (played by Conrad Coates), and the daughter Kindzi (Nichole Galicia). And what’s lovely, as a side note, is they tend to be an antithetical mirror to Nolan and Irisa.

TVLINE | True. I noticed that.
Another father/daughter combination. Very, very strong bond. Both coming out of an enormous sense of loss, which we will discover later on.

TVLINE | And they look like real aliens, with dangerous teeth, hissing….
Dude, they are so cool. I’m into them too and they’ve got the ninja stars in their hats. Have you noticed that yet? OK, they’re not actually ninja stars, but that’s what I always say when I go to set. They go, “That’s not what they are, Grant,” and I’m like, “Whatever.” But their problem 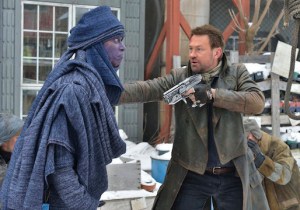 isn’t with the humans per se, although they have no experience with humans. Their problem is with the Votans, because they are this as yet un-talked about eighth race. And the reason why they were un-talked about was because the other seven races did the most horrific thing imaginable and exterminated them — or thought they’d exterminated them — before escaping on the Arks. So, the Omec are back and they’re not happy.

TVLINE | I think what you’re trying to say is: “This can’t end well.”
One way or another, it doesn’t look good. If Rahm Tak gets his way, all the humans are dead. If the Omec become supreme, then all the Votans could be dead. So, yeah, it’s basically a Defiance sandwich.

TVLINE | Tell me about Nolan’s journey this season.
I’m biased because I play him, but I love what happens with my guy this season. I asked Kevin for something to keep Nolan preoccupied aside from Irisa, because he tends to run around after her a lot, and what he delivered was unbelievable. For the first time, Nolan becomes vulnerable in the sense that he falls down. He has always been this kind of unstoppable force of pragmatism that keeps marching forward no matter what happens, and in Season 3 he stumbles and falls, and he can’t get up. As a result, we have this development in that [father/daughter] relationship where for the first time she has to become the adult. She has to pick him up off the ground and put him back together, and that was great to play.

TVLINE | But on the brighter side, I’m thinking it might be finally time for him and Amanda. I mean, Pottinger’s gone, and they kind of have a little moment in the premiere. And Nolan’s got some stress to relieve after two seasons.
I know what you mean. They’re very happy to see each other. What I do know is that their relationship has changed beyond just a very strong mutual attraction. At the beginning of the third season especially, they’ve kind of become best friends, which leads me more and more to think that they end up together. What’s wonderful about Season 3 is they start working together in a way they’ve never been able to, because they’ve always clashed before. So that friendship has kind of become something really profound. I have my fingers crossed for Nolan and Amanda.

TVLINE | Without saying who they were…. What was your reaction to the three big deaths in the premiere? I, for one, was rather gobsmacked.
I picked up the phone immediately and went, “You guys know what you just wrote??” It was a big call. But one thing we found at the end of Season 2 was that the show was trying to serve so many masters, in terms of storylines and arcs, and not necessarily serving everybody well. And those kind of decisions, which are a pay grade above mine, are tough to make. Does the show get stronger or weaker with those decisions? But as it turns out, Season 3, I think, is by light years the best season that we’ve shot —  in part because we’re focusing more cleanly on what we have. So, I love every one of those people and they’re my friends, and I love working with them and I would happily work with them for 10, 15 years. And I hate saying goodbye to people, but television’s become a very precarious world to live in. People die all the time now. I was laughing earlier today, that if you go back and look at Hogan’s Heroes, nobody ever died. It was Nazi Germany, but they all survived for a thousand years! But television these days is a much more deadly universe to exist in as a character.

Want more scoop on Defiance, or for any other show? Email insideline@tvline.com and your question may be answered via Matt’s Inside Line.