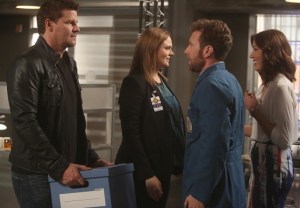 In a season finale that felt like the show was bidding adieu for good, Bones on Thursday night found Booth and Brennan saying goodbye to their colleagues as they prepared for a fresh start somewhere else — even as a videotape featuring an old foe surfaced.

“Pelant is in the past,” Brennan declared. “I won’t have him steal the new life Booth and I are going to live.”

Meanwhile, Hodgins declared that he and Angela didn’t need the $4 billion(!) Pelant stole, which his wife recovered, and instead suggested the tainted money go to 100 charities. Angie agreed to the plan, as long as they eschewed their Paris plans and stayed put at the Jeffersonian.

Below, executive producer Stephen Nathan discusses the episode’s finite feeling, Angela and Hodgins’ surprising decision, Season 11’s big changes and more. Plus: Will Pelant draw Booth and Brennan back to their old life?

TVLINE | There was something very series finale-ish about the ending. Was that you just being pragmatic in case the show didn’t get renewed?
Yes. We were tasked with doing two episodes in one. The one thing we wouldn’t compromise was our relationship with the audience. We couldn’t have an open-ended end if it was a series finale. That would have been unfair to the people who have been watching for 10 years. If this was really going to be it, we wanted it to be the end. Now, at the same time, once we were kind of down the road and the show got picked up – we knew this was a possibility – there had to be some kind of subtextual something going on that gave us the feel that it could keep going. So that’s what we did our best to do. And it gives us a great challenge for next season to come back from this. There’ll be a bit of a time jump, and we will see what it is that pulls them back into this world and this family that they’ve grown with for the past 10 years. 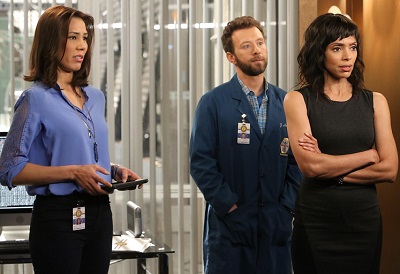 TVLINE | With Brennan and Booth leaving, but Angela and Hodgins deciding to stay, was it an either-or situation?
We couldn’t blow apart the whole place. And also, there was something always indefinite about Hodgins’ feelings about moving to Paris. Because he loves her, he [would do] it, of course. But she saw that. It just allowed us to see their relationship in a very crucial situation, see how two people in a life-changing situation really respond and what that means for their relationship. … We can’t do scenes in Paris, and Hodgins and Angela work in the lab. To bring them back, it would have been a rerun of the other episode we did where everybody was called back to help Cam. We just wanted this to be different and based on their relationship rather than some kind of goofy plot twist.

TVLINE | Might the answer to what brings Brennan and Booth back be found on the unwatched Pelant tape?
Everything is up in the air right now, to be honest. I don’t want to say yes or no to anything. It’s a big task to work them back and get them resolved again. We don’t want to take the easy way out. You don’t want to just go back to a well that’s running dry.

TVLINE | When next season opens, will we see who has replaced Brennan?
Yes.

TVLINE | Could it be someone we already know? Or are you planning to bring in a new character?
Everything is still up in the air. I can’t really say anything definitively about [Season] 11.

TVLINE | What about any cast changes? We’ve talked before about how the squinterns keep landing pilots and other roles.
We just have to be very agile. We have to be ready to move at the drop of a hat with the interns because they are so popular and rightfully so. Often times during the season, we have to write somebody out, somebody in, because they’re doing other things. So there’s always the potential for new people coming [in]. And also from looking at our locations a little bit differently and adding people.

TVLINE | If you can get Laura Spencer back, will you pursue the Aubrey and Jessica story?
It’s pretty fun. Those guys were pretty great together. John Boyd was just a drop from heaven this year. He did a wonderful job.

TVLINE | Finally, I noticed that after Arastoo comforted Cam, when they were coming back out to say their goodbyes, it looked like they were buttoning up their clothes. Am I crazy here?
No, you’re not. They were putting on their lab coats. No, they didn’t just have at it in Cam’s office. [Laughs] That’s hilarious! What a great question.

TVLINE | I wondered, because it seemed so unlike Cam, “Did they just do what I think they did?”
Oh, that’s hilarious. I hope everybody makes the same mistake. That’s great… That made my day.

Bones fans, what did you think of the finale? Did it give you a sense of closure? Any predictions for Season 11? Grade the episode via the poll below, then hit the comments to back up your pick.