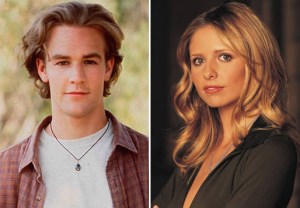 ABC Family is giving its young viewers a much-needed crash course in the classics.

Already a haven for more Gilmore Girls reruns than you could shake a stick at, the network will soon add Dawson’s Creek and Buffy the Vampire Slayer to its ranks, according to TV Insider.

Beginning June 29, Dawson’s Creek will air weekdays at 12/11c, with Buffy following at 5/4c. Both runs will begin with the series’ pilots, so neither you nor your DVR have any excuses for missing out. (Side note: Can you imagine going back in time and explaining the concept of DVRs to your angsty, ’90s self?)

ABC Family is also sweetening the pot with a “Fan Favorite Week” (June 22-26), which will feature episodes selected by fans online.

Your thoughts on this WB-eautiful news? Which episodes of each show would you select as your fan-favorites? Drop a comment with your picks below.