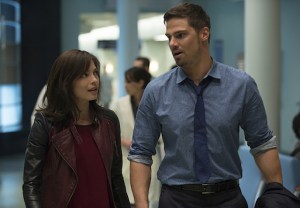 You’ll have to forgive Jay Ryan for not helping represent Beauty and the Beast at The CW’s Upfront event last month. Just know that only 6,600 miles would ever keep him apart from the drama’s passionate fans.

“I was in New Zealand, on the other side of the planet, and I couldn’t make it in time,” the Kiwi actor explains. “So I left it to the Beauty” — leading lady Kristin Kreuk (watch video) — “to take over.”

Because make no mistake, Ryan has a lot to say about Season 3, premiering Thursday at 8/7c. Here, he previews Vincent’s “big question” for Catherine, the twist that reveals a “vulnerability” in the sometime beast, the loss of something dear to “bachelor” Vincent and more.

TVLINE | All told, what’s different about Season 3?
I feel like [showrunner] Brad [Kern] is really diving unto the mythology element, which kind of unravels the greater purpose of Vincent and Catherine’s destiny, as two people together.

TVLINE | Playing an in-control, not-being-hunted, quote-unquote “domesticated” beast runs the risk of being non-exciting for the actor. What’s keeping Vincent interesting for you in Season 3?
Off the top, that’s what Vincent is kind of pining for, that normalcy in life, becoming part of the status quo and thinking that he’s going to enjoy that. But he soon realizes that the people who are around him, the ones he has been the protector of in a way, are feeling a little empty without this excitement and risk in their lives. Everyone’s in this slump while Vincent is on the up, and once he stops for a minute to marvel at the glory of his new life, he sees that everyone else is a bit off. He realizes that he has to fulfill who he is and his current purpose — and that is to protect.

TVLINE | Thank God, then, that a new threat comes along!
There’s always a new threat! Absolutely. We’re looking more at the supernatural side this year. Vincent’s in this kind of bubble of happiness, he’s about to pop the big question to Catherine, when this occurrence of the supernatural 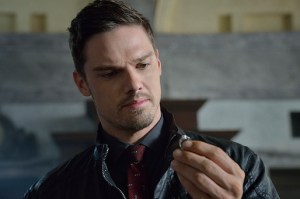 variety begins to rear its ugly head in New York City. Immediately, Catherine is back to her old self — she wants answers — while Vincent just wants to pop the question and run away from it all. But initially they don’t really know what they’re dealing with — just that it’s almost a hybrid of a human and something of the supernatural variety.

TVLINE | How will this new threat affect, or not, the next steps Vincent and Catherine were about to take?
It’s funny because Vincent is right on the edge of getting down on one knee and asking for her hand in marriage….

TVLINE | Really, he was gonna do the bended knee and all?
Absolutely! It’s The CW, man — we go all out. Red roses, candles….

TVLINE | I’ve always wondered who lights those dozens of candles. Because in truth it would take one person, like, 15 minutes.
That’s right, but through the magic of television we have the pre-lit candle, which is just an LED light, mixed in with the actual fire candles, creating a lovely setting.

But yeah, Vincent learns very quickly that in having this commitment with Catherine, he has to acknowledge what her needs and wants are. He’s on this happy plateau, but he realizes that that doesn’t work for her. It pushes him to a point where he feels so affected and hurt that Catherine wants him to continue to “unleash the beast,” it creates a bit of an anxiety in him, a bit of a vulnerability. He gets to thinking that without his darker side and without this risk in their lives, what do they have as a couple? In the end, he [decides that] if Catherine wants to continue on this journey of “fighting the good fight,” he wants that out of the way before they start their new lives.

TVLINE | And this new threat is how we keep JT and Tess (played by Austin Basis and Nina Lisandrello) in the mix?
Without JT and Tess, 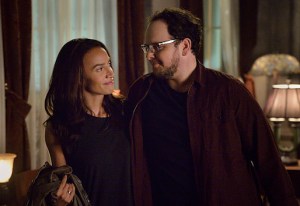 Catherine and Vincent would be long gone, I’m sure. [Laughs] Tess and JT are always in the shadows of those two but they are a bit of a life force for those two.

TVLINE | They really have become entertaining to watch in their own right. Great banter.
Yeah, they’ve kind of taken over the “new infancy of a relationship” that we saw with Catherine and Vincent in Season 1. They fill that need for our hungry fans who are romantic at heart. So that’s a new, blossoming relationship alongside Vincent and Catherine’s hunt for the Big Bad.

TVLINE | Nicole Gale Anderson is back full-time. Is Heather on Team Vincent yet or still coming around?
She’s still coming around, but Vincent has a great love for Heather. He’s never had that little sister dynamic in his life before — he’s always had his older brothers, who are now gone — so that whole sibling thing is very attractive to him. It’s sort of making his family unit a little stronger. And yet that also adds to Vincent’s anxiety — another one he has to keep alive!

TVLINE | What are guest stars Natasha Henstridge (The Secret Circle) and Alan Van Sprang (Reign) up to in Episode 3?
They were awesome to have come onto our show; they really brought a fun, kickass dynamic. It’s one of my favorite episodes of Season 3. They’re almost like a version of Vincent and Catherine in five to 10 years time…

TVLINE | For better or for worse?
Well, at first Vincent and Catherine think, “We have found our other couple! That we can hang with and be open with!,” because we’re sort of in the same line of work, but there’s always a twist on Beauty and the Beast. That episode also marks the end of Vincent’s sort of “bachelor beast” life as well. It may be the end of his reclusive house boat.

TVLINE | Give me one last tease for the new season. Was there anything cool and new you got to do?
Actually, in the episode with Natasha, there is a fantastic stunt sequence a la The Matrix, so we got to work with some exciting new technology. Watching Natasha in Matrix-like slow motion is definitely something to watch out for!