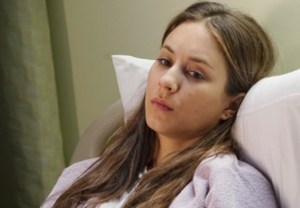 Pretty Little Liars has put its core quartet through hell over the past five years, but the ABC Family drama has never been heavier — or better — than it was Tuesday night.

We may never know exactly what the girls endured during their three weeks in Charles’ compound, but the torture clearly left a few scars, some of which will never fully heal. They’re not the same people they were before the events of last season’s finale; they’re more scared, vulnerable and uncertain than they’ve ever been, despite being closer than ever to finally unmasking their tormentor.

And, frankly, there’s still no way of knowing who that tormentor is. It’s easy to point fingers at Andrew, the only apparent suspect in all of this, but the truth is rarely that simple — especially if the girls are to believe fellow prisoner Sara Harvey.

Let’s take a look at how each of the girls coped — or attempted to cope — with their new normals:

HANNA | Designing the girls’ prison rooms to look like their actual bedrooms was Charles’ most brilliant — and most twisted — act of all. Within minutes of returning home, Hanna was haunted by nightmarish flashbacks from the dollhouse, stripping her house of all former security. And while I would totally tune into the Caleb Replaces Wallpaper spinoff on HGTV, I got no joy out of seeing Hanna succumbing to her fear. I did, however, get all sorts of joy from seeing Ashley comfort her daughter. (More scenes between those two, please!) 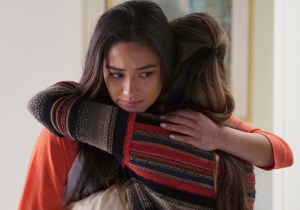 EMILY | Unsurprisingly, Emily chose the physical route to recovery, grabbing her father’s gun and heading straight to the firing range. And after seeing her flashback to Charles’ compound — “Choose one, or all will suffer!” — can you really blame her? Pam attempted to talk some sense into her daughter, but it was a surprise visitor (Sara!) who really got through to her: “Are you sure it’s him?” she asked about Andrew after seeing him on TV and not recognizing him. Could he really be innocent, after all?

SPENCER | Addiction once again reared its ugly head, as Spencer’s parents refused to give her the pills prescribed to her at the hospital. Unfortunately, all four of the girls received prescriptions and Spencer looked particularly tempted during a brief visit to Aria’s house. I guess that explains why good ol’ Dean is coming back in a few weeks; Spencer’s in need of a serious sponsor meeting. (Side note: Was anyone else a little put off by Toby’s demand for “five minutes” with Andrew? Sure, he suspected the hot nerd of torturing the girls, but the last thing this town needs is another corrupt cop.)

ARIA | Miz Montgomery took the show’s title to new heights during a meeting with an investigator, telling her she saw Andrew’s face at the compound, a lie Ella saw right through. Speaking of Ella, if anyone can decipher Aria’s mom’s cryptic advice (“Aria, you’re very smart, but please remember, you’re also very wise”), I’d be most appreciative. Mama Montgomery is apparently too deep for this reporter. At least we got a nice scene between Aria and her former flame; Ezria is definitely a language I speak.

ALISON | The most surprising response to the events of the past month came from Alison, and I’m not talking about her suddenly cozying up to Toby’s new partner Lorenzo; Ali flirting with a cop is anything but surprising. I’m talking about her decision to go back to church, one of the only places that make her feel safe. (Side note: It was kind of weird seeing Alison in church, not attending — or being the subject of — a funeral, but I liked it.)

PLL fans: Do you think Andrew is really innocent? Are you worried about Spencer’s addiction getting the best of her? And is there any chance Ali’s new man-in-uniform isn’t a crooked monster? Drop a comment with your thoughts below.